A Resource Guide
[with a section on Radio Interference]

© copyright 2019 by Andrew Fraknoi.  Permission to use for any non-profit educational purpose is hereby granted.  For any other use, contact the author at: fraknoi {at} fhda {dot} edu

These days, as human civilization and electric lights spread across the globe, few places on Earth remain truly dark. For astronomers, trying to collect the faint light of distant objects, this “light pollution” from human activity has become a serious problem. Some of our light fixtures are worse than others in terms of the glare and wasted light they produce and the number of colors (wavelengths) they block from celestial objects.  In this introductory guide, we list a selection of the resources that describe the efforts of astronomers and environmentalists to educate policy makers and the public about light pollution (and also the crowding of radio channels needed for astronomy.)

Articles on the Web

Activities for Teachers and Students

Radio astronomer search for “faint” radio static from cosmic objects.  Increasingly, the signals they are searching for are lost in the “din” of terrestrial radio communications, particularly the requirements of cellular phones and other modern communications using satellites.  Major political battles loom as the demands of business clash with the need to protect certain important channels for radio astronomy.  Here are a few selected resources about this area:

(The author would like to thank David Crawford, Connie Walker, and Johanna Duffek for suggestions for this guide.) 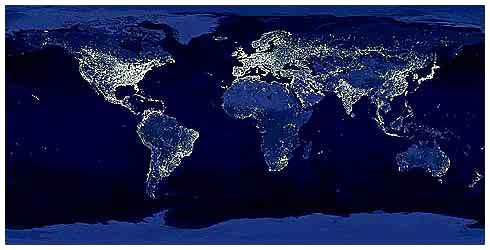 The World at Night (from Satellite Imaging)