For significant observational or technical achievements by an amateur astronomer

In 2018, the ASP Board of Directors decided to honor Board Member Gordon Myers’ contributions to the ASP by naming the Amateur Achievement Award after him. Gordon has been instrumental in steering the Society over the past decade and it is a suitable honor for his dedication.

The Gordon Myers Amateur Achievement Award recognizes significant observational or technological contributions to astronomy or amateur astronomy by an individual not employed in the field of astronomy in a professional capacity. 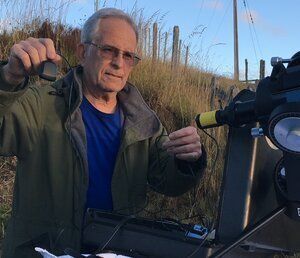 The 2022 recipient of the Gordon Myers Amateur Achievement Award is Paul D. Maley who has demonstrated an extraordinary record of accomplishment for an amateur astronomer, contributing serious professional quality work at the highest levels.

San Francisco, California- August 30, 2022 - The Gordon Myers Amateur Achievement Award recognizes significant observational or technological contributions to astronomy by an individual not employed in a professional capacity. The 2022 recipient is Paul D. Maley who has demonstrated an extraordinary record of accomplishment for an amateur astronomer, contributing serious professional quality work at the highest levels.

Dedicating nearly 60 years of his life to his craft, Maley is a passionate amateur astronomer, not just in his love for observing, but also traveling around the world encouraging, advising, and enabling others to chase solar eclipses, stellar occultations, and the Northern Lights.

Maley’s tireless efforts include his commitment to public outreach as a longtime member of the Johnson Space Center Astronomical Society (JSCAS). He has organized almost 50 solar eclipse expeditions around the world, two Transit of Venus expeditions, three Transit of Mercury ventures, and personally observed 80 solar eclipses of all types through 2022. He planned these trips generally several years in advance looking at the history of weather records and assessing possible hazards to select the highest probability of success and safest locations for viewing.  His work supporting the JSCAS has also included training international amateurs in the art of making grazing lunar occultation and minor planet occultation measurements. As one nominator expresses “Before anyone had heard the term Citizen Science he was out there, organizing it…”. His travels and observational trips have taken him to places like Saudi Arabia and Iraq, to Cuba and India. He has created official historical markers for the location of lesser known but important astronomical events such as expeditions in the 18th and 19th century for Transits of Venus; also for the residence of Asaph Hall, the discoverer of Mars’ two satellites in Washington, DC.

A major part of Maley’s life has also been spent observing and documenting sky phenomena concentrating on artificial earth satellites, spacecraft reentries and asteroids. A fellow nominator and JSCAS member noted that Maley “observed over 500 minor planet occultations from six continents in an ongoing effort to measure shapes and sizes of minor planets.”  His most notable contribution was the possible first observation of an occultation of a star by an asteroid moon in 1977—a type of body never before known to exist. Although not confirmed, the subsequent report spurred professionals and amateurs to observe asteroid occultations until the first confirmed asteroid moon was imaged by the Galileo spacecraft in 1993. Additional work in this field included observations of grazing occultations at the edges of the predicted path to improve the polar diameter of the Moon, and observations from the edges of solar eclipse paths to attempt to determine changes in the Sun’s polar diameter.  Several new double stars were discovered as a result of his occultation activity.

Maley’s astronomical work separately resulted in the discovery of intense flashes of light occurring when the Sun’s light glints from inactive earth satellites - originally mistaken for novel astronomical phenomena in the 1980s and 90s. This gave fair warning of the amount of space debris humans had created, but also demonstrated how inactive Earth satellites could create some ‘false’ professional astronomical discoveries. There is no doubt Maley has made use of his skills as an amateur astronomer, shared this enthusiasm with the public through his solar eclipse, occultation travels, viewing the Northern Lights, and ultimately through discovery, observation, and collaboration impacted the professional world of astronomy.

Join us in celebration of Paul Maley’s achievements at the in-person ASP Awards Gala on November 19, 2022 in Burlingame, California.