The Bok prize is named for Bart and Priscilla Bok. Bart Bok was an outstanding research astronomer who made important contributions to our understanding of the Milky Way and of star formation. He received the Bruce Medal for lifetime achievement in astronomy, and in 1982 the Klumpke-Roberts Award for the popularization of astronomy. Throughout his life, and especially as an ASP Board member, Bok was a strong advocate for outreach and education in astronomy as was his wife, Priscilla, also a distinguished astronomer. Upon Bart Bok’s death in 1983, the Society established the Bart Bok Memorial Fund to support educational projects. At the suggestion of the AAS, the activities supported by the Bok Fund were expanded to include the joint sponsorship of an astronomy Priscilla and Bart Bok Award given at the Intel Science and Engineering Fair. The Priscilla and Bart Bok Award was last given in 2017. 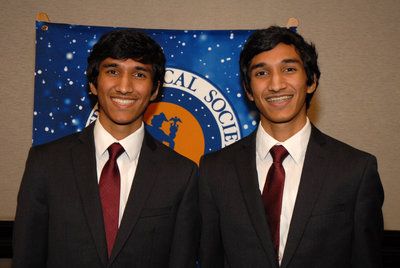 The Priscilla and Bart Bok Awards are given jointly by the ASP and the AAS. The main criterion for selecting the two annual Bok Award winners is scientific merit. Observational, instrumental, theoretical, and interdisciplinary projects involving physics, mathematics, computer sciences, and engineering in support of astronomy are eligible. The awarded funds are intended to be used by the recipients to further their education and research efforts, and are augmented by support for travel to the next winter meeting of the AAS.