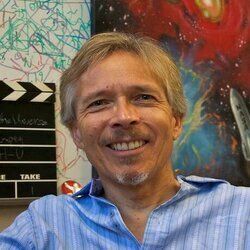 Chris Impey is a University Distinguished Professor of Astronomy at the University of Arizona. He has 210 refereed publications on observational cosmology, galaxies, and quasars, and his research has been supported by $20 million in NASA and NSF grants. He has won eleven teaching awards and has taught three online classes with over 350,000 enrolled and 5 million minutes of video lectures watched. Chris Impey is a past Vice President of the American Astronomical Society, and he has won its career Education Prize. He’s also been NSF Distinguished Teaching Scholar, Carnegie Council’s Arizona Professor of the Year, and a Howard Hughes Medical Institute Professor. He has written 80 popular articles on cosmology, astrobiology and education, two textbooks, a novel called Shadow World, and nine popular science books: The Living Cosmos, How It Ends, Talking About Life, How It Began, Dreams of Other Worlds, Humble Before the Void, Beyond: The Future of Space Travel, Einstein’s Monsters: The Life and Times of Black Holes, and an upcoming book on exoplanets, Worlds Without End.