ASP2019: Earth to Space - Celebrating a Century of Astronomy 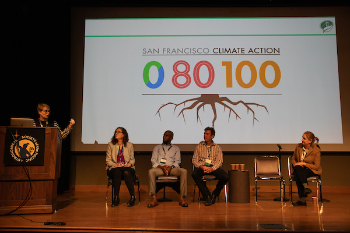 Kimberly Ennico Smith, staff scientist from NASA Ames, kicked off the day presenting "Exploring the Moon: Past, Present, and Future" discussing lunar science research as well as manned and unmanned exploration of the Moon. Following her talk, a tag-team set of presentations titled "100 Earths," with research astronomers and collaborators studying planets outside our solar system, Debra Fischer (Yale Univ.) and John Michael Brewer (San Francisco State Univ.) discussed the fascinating history and future of exoplanets research, including the hope and promise of finding perhaps dozens of Earth-like planets before too long.

Finally, our keynote presentation featured professor Andrew Fraknoi (Univ. of San Francisco), delivering "The Top Tourist Sites of the Solar System," as well as an introductory brief history of the ASP since its founding 130 years ago. In a lively entertaining talk envisioning future tourism to planets and moons as far away as Pluto, he highlighted much of the amazing research and exploration that has revealed incredible sights that our descendants will surely seek out when people travel away from Earth on trips in the next several decades.

Thank you to our speakers, panelists, and SF State Student and Staff volunteers who dedicated a day to astronomy!