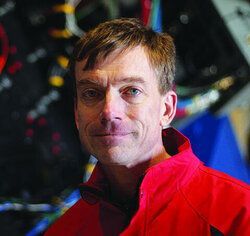 Jeff Hall  joined the staff at Lowell Observatory in 1992 as a postdoctoral research fellow. He was appointed Director in December 2010. His research focuses on optical spectroscopy of solar and stellar activity cycles, with the goal of characterizing their origin and morphology as well as lending an astronomical perspective to solar influences on terrestrial climate. He is Chair of the American Astronomical Society’s Committee on Light Pollution, Radio Interference, and Space Debris, and is also Chair of the Solar Observatory Council for the Association of Universities for Research in Astronomy. In the Flagstaff community, he is former President of the Governing Board of Northland Preparatory Academy, a college-prep charter school, as well as of the Board of Directors of the Flagstaff Symphony Orchestra. His principal avocation is music, and he has been a substitute organist at the Episcopal Church of the Epiphany as long as he has lived in Flagstaff.