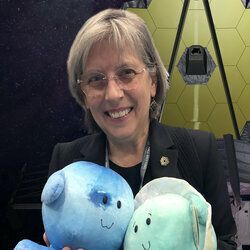 Dr. Heidi Hammel is one of the six Interdisciplinary Scientists for the James Webb Space Telescope (JWST) selected by NASA in 2002. She received her undergraduate degree from MIT and her Ph.D. from the University of Hawaii.  She is currently the Vice President for Science at AURA, an organization that operates large astronomical observatories for the United States government, including the Hubble Space Telescope, James Webb Space Telescope, Gemini Observatory, and many more.  Dr. Hammel primarily studies outer planets; she served on the imaging team for the Voyager 2 Neptune encounter, and has studied Uranus and Neptune extensively with Hubble and other facilities. She has been recognized for both her science and her work in public outreach, including the Sagan Medal and the San Francisco Exploratorium's Public Understanding of Science Award. In 2020, she received the American Astronomical Society’s Masursky Award for outstanding service to planetary science and exploration.  Asteroid "1981 EC20" was renamed 3530 Hammel in her honor.