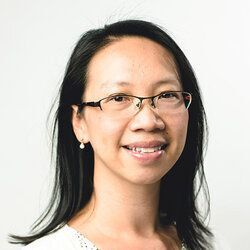 Dr. Quyen Hart is the Project Scientist for JWST Science Communication in the Office of Public Outreach at the Space Telescope Science Institute, the mission and science operation center for JWST. Quyen leads public outreach efforts for the JWST and is involved in several projects for NASA’s Universe of Learning, including Girls STEAM Ahead with NASA and ViewSpace.

For more than 25 years, Quyen has been actively involved in formal and informal astronomy education, providing unique learning experiences for people of all ages. Quyen earned her Ph.D. from the University of Colorado Boulder, where she used multiwavelength datasets to study active supermassive black holes in clusters of galaxies. Prior to joining STScI, she was a tenured associate professor of astronomy and physics at a regional liberal arts college in Denver, Colorado. She has extensive experience with teaching undergraduate level astronomy and physics courses, as well as leading informal education programs and events, including summer camps, STEM showcases, and solar eclipse events. She is passionate about sharing the wonders of astronomy and science to the general public because she knows that everyone can be a scientist!