Windows, Mirrors, and Sliding Doors to the Universe 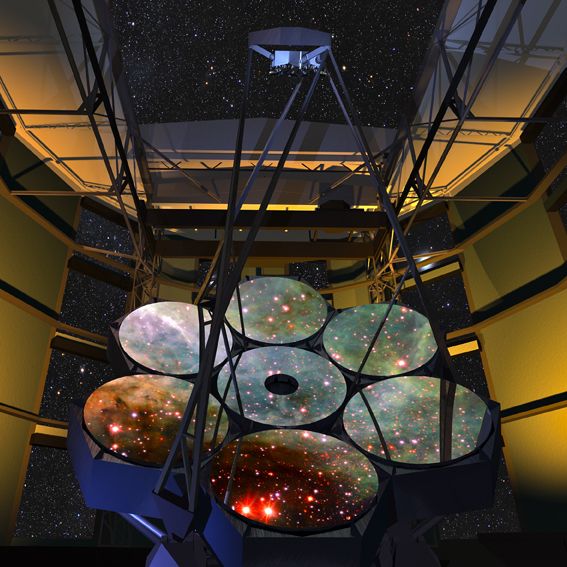 Image: The Giant Magellan Telescope, which is under construction in Chile, will be a powerful new “window to the universe”—or will it be a “mirror”? [GMT]

The phrase a "window to the universe" has become ubiquitous every time a new observatory or astronomical instrument is built.

While there is a certain aesthetic to the phrase, when applied so often it becomes easy to not think about the message and what it is trying to convey. It makes sense to use a window as a metaphor; after all, we are familiar with how we can see outside a building through its windows. However, the "window" implies a one-way investigation; our interaction with phenomena is restricted to making a limited set of observations, from the inside looking out. If only the window were a sliding door to allow us to step through and engage directly with the phenomena!

It is perhaps somewhat ironic our instruments of choice for investigating the universe usually do so with mirrors. Metaphorically, astronomical research reflects back on our own situation here on Earth and may impact our understanding of processes essential for our existence. However, a great deal of astronomical research has little identifiable benefit beyond the expansion of a basic understanding about how the universe operates. We seldom see it acting like a mirror, reflecting back on our understanding of self or tribe.

Much research in astrobiology does act as a mirror as we continue to expand our definition of both life and the conditions necessary to sustain its presence. In general, self reflection as a species is not one of our strong suits—we find it difficult to apply the knowledge gained to our own situation, brushing it off as something that happens "out there" and not here. And many times, particularly in scenarios presented in science fiction, in the presence of much evidence to the contrary, we see ourselves as thriving outside our terrestrial environment.

The arts world might shed some light on how to think about our interaction with the external universe. In 1978, John Szarkowski, the head of the photography department at the Museum of Modern Art in New York, published an essay in conjunction with a new exhibit at the museum. The exhibit, Mirrors and Windows: American Photography Since 1960, along with his essay, suggested photographs fall into one of two categories: windows or mirrors. (Though he does suggest a continuum with the main descriptors as end points.) Not only do photographs represent either a window or a mirror, they can describe the artist’s work as a whole. Basically, the difference is between those who take photographs of things outside themselves in order to show what they look like, or their images document a process of self expression reflecting on the photographer’s self-discovery or introspection, and perhaps for observers of their images as well.

Educators face a somewhat similar task as they construct learning opportunities using a variety of resources for students to explore the external world. All too often however, these experiences are exclusively windows, bearing little relevance to the learner’s own life, and they frequently question why they are studying a particular topic, and its application to their own situation.

Emily Style in her 1988 essay Curriculum As Window and Mirror noted there is a “need for curriculum to function both as window and as mirror, in order to reflect and reveal most accurately both a multicultural world and the student herself or himself.” Style posited the need for a balanced education for everyone, to include learning about both the known and the unknown in the greater world, and knowledge of others as well as the self. To illustrate, she draws on two examples demonstrating how girls are unable to see them-selves. In one, the essayist made statements such as “why are there no great women artists?”; the second describes a story in a magazine that led with the quote “baseball is fathers and sons playing catch,” then goes on to feature only photos of fathers and sons, with a final image of a mother and son, with the mother having played in a women’s baseball league. Both of these examples serve to exclude girls from the scenarios, not allowing them to see themselves as participants in either art or baseball.

Both Style, and writers such as Rudine Sims Bishop considered how much of children’s literature and educational materials tended to portray a singular vision of white males as the dominant characters. Anecdotally, it is easy to remember when the only vision one would have of a scientist was of an older white male with a variety of eccentricities seldom found in ordinary society. Thus, reinforcing the notion science was the exclusive domain of white males.

While science and science education have made great strides in making both the phenomena and participation in its exploration more accessible to those traditionally underrepresented in the ranks of practitioners, much work remains. Bishop suggested windows have the potential to act as sliding doors, allowing a reader to step through in their imagination to become a part of the story. Before a learner can step through however, they will need to see reflections of themselves as participants in something that has relevance to their own story and that of the culture in which they are embedded. Our challenge is to break free of our own past and create a culture of science education where every learner can see themselves reflected in the ongoing story of exploration and discovery out in the broader universe.