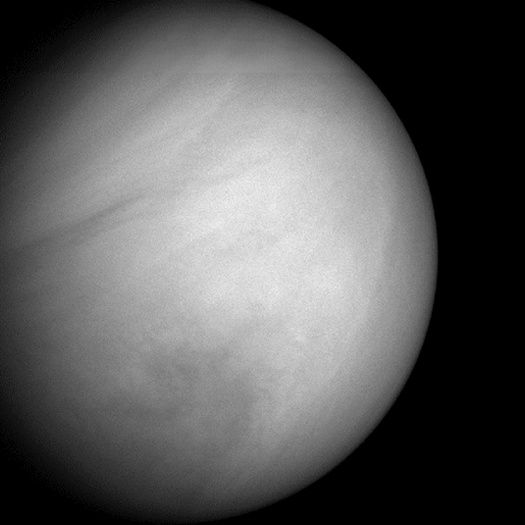 Image: In 2007, MESSENGER flew by Venus and captured this view. [NASA/ JHUAPL/Carnegie Institution of Washington]

Venus is Earth’s often-neglected neighbor. Occasionally, though, missions to Mercury and the Sun swing by Venus on their way to their targets, and in the process collect much-needed data of Venus. An April Nature Astronomy paper uses some of that precious data to piece together what’s happening in Venus’ atmosphere.

In June 2007, on its way to Mercury, NASA’s MESSENGER spacecraft passed 210 miles (338 km) over Venus. This flyby used Venus’ gravity to alter the probe’s orbit, and it also tested MESSENGER’s instruments.

As high-energy cosmic particles slam into Venus’ atmosphere, they can interact with gas particles and release neutrons. Molecular nitrogen — the second-most abundant molecule in the atmosphere of Venus — is especially prone to this interaction. Those neutrons collide with more material in the atmosphere and lose energy. An instrument onboard MESSENGER looked for neutrons coming from Venus. Years later, a team of physicists from Johns Hopkins Applied Physics Laboratory (JHUAPL) in Laurel, Maryland, looked at the data.

By studying the energies of the escaping neutrons, Patrick Peplowski and David Lawrence could learn about the amounts and at what depth that nitrogen comes from. They built a computer model that broke apart Venus’ 62-miles- (100-km-) thick atmosphere into 1.2-miles- (2-km-) thick sections. They then varied the nitrogen content in those layers and measured the energy the neutrons carried. The model that fit the MESSENGER data closest showed that nitrogen is 40 percent more prevalent in the upper half of the atmosphere than at altitudes below 31 miles (50 km). A chance to confirm the discovery might come in the next few years, though. If picked, one of the four proposed small scale NASA planetary science missions would study the atmosphere of Venus.

The 2007 MESSENGER data has even more information to give scientists. Jack Wilson — also at JHUAPL and the third-author on the Nature Astronomy paper — lead a study that used the Venus neutron data and an observation collected during a 2008 flyby from Mercury to measure how long a neutron lives. A neutron that’s not restricted to a nucleus doesn’t last long. It converts into three lower-mass particles in under 15 minutes, although the exact time is highly debated. This new study, published in Physical Review Letters, shows that it is possible to measure these neutron lifetimes in space, and with future observations perhaps measure the precise lifetime.