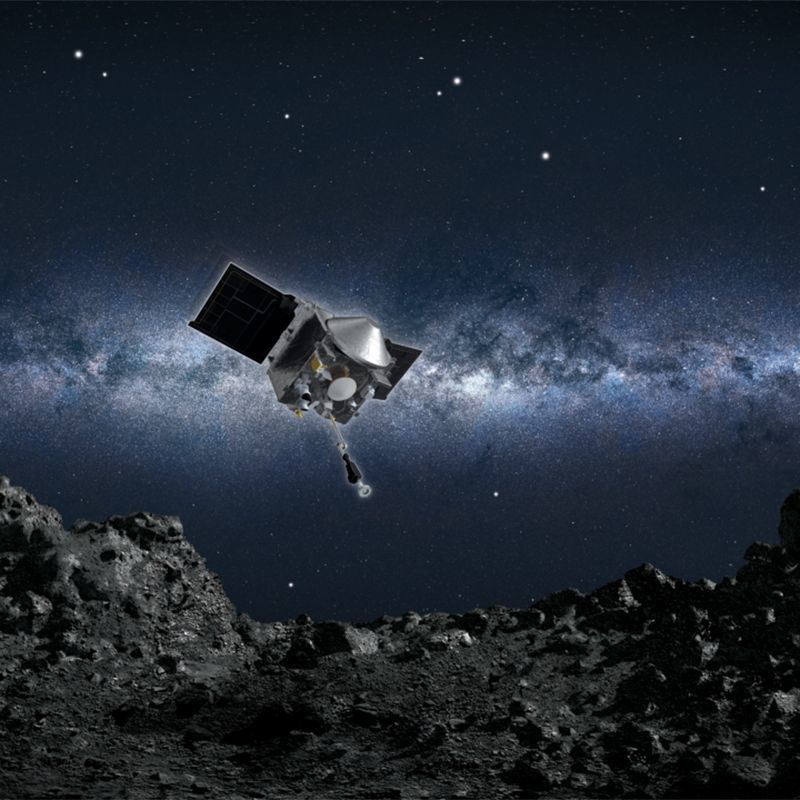 Image: The OSIRIS-REx spacecraft nears the surface of asteroid Bennu in this artist's illustration. [NASA/Goddard/University of Arizona]

At about 6:10 pm Eastern today, a NASA spacecraft will touch an asteroid, grab a 2-ounce sample of debris, and hold onto it until a return to Earth. At least, that’s the plan of this first attempt at the OSIRIS-REx mission’s complex series of events. If this first “touch-and-go” attempt doesn’t work out, the OSIRIS-REx mission (short for Origins, Spectral Interpretation, Resource Identification, Security-Regolith Explorer) will have two more opportunities before it starts its return to Earth March 2021. You can watch the touch-and-go event at the mission’s website.

OSIRIS-REx launched September 8, 2016, and arrived at its target, asteroid Bennu, December 3, 2018. Since then, it has orbited the carbonaceous asteroid. Dark, rocky regolith covers Bennu’s surface. Before the spacecraft arrived at the asteroid, scientists thought the surface was covered in a top layer of loose, small material, but with higher resolution images from up-close, they saw that instead its covered in mostly boulders. That will make this touch-and-go process a bit more complex.

Because Bennu and OSIRIS-REx are far enough from Earth that light (and therefore spacecraft commands) take some 18 minutes to travel between the craft and Earth, the spacecraft follows the sequence of events autonomously. The spacecraft’s arm (with sampler head at the end) should be in contact with Bennu’s surface for just a few seconds, during which it will puff out nitrogen gas to agitate dust and small particles. After the sampler head captures those particles, the OSIRIS-REx craft fires its thruster and backs away from the asteroid.

The mission timeline has the spacecraft returning to Earth in September 2023. The samples will be within a capsule, which will separate from the rest of the craft and enter Earth’s atmosphere. With the help of a heat shield and parachutes, it should set down at the Utah Test and Training Range.