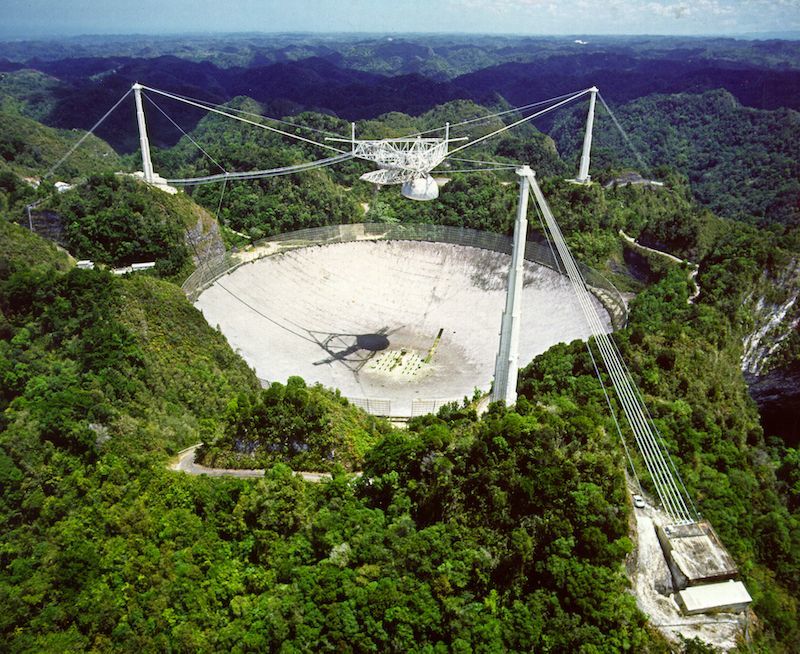 Editor's comment: On December 1, the Arecibo 305m telescope's metal platform collapsed and ripped through the dish lying 450 feet (137 meters) below. No one was hurt, but the iconic telescope has been destroyed.

Earlier today, the National Science Foundation (NSF) announced a sad end for one of astronomy’s most iconic telescopes. The 1,000-foot (305-meter) wide radio dish telescope at Arecibo Observatory in Puerto Rico will be dismantled and decommissioned. This decision follows several engineering reports of the structure after a second cable, a main cable, snapped on November 6. Those reports show that the entire structure is at risk of a catastrophic, uncontrolled collapse, and there’s no way to address the damage without risking safety of the crews. Instead of attempting to fix the telescope, NSF has decided to decommission it.

Some 450 feet above the 1,000-feet-wide dish is the telescope’s 900-ton instrument platform, suspended like a bridge on 18 cables connected to three concrete towers. On August 10, an auxiliary cable slipped out of its socket on tower 4 (the three towers are numbered 4, 8, and 12 like the numbers on a clockface), crashed through the dish below, and ripped a 100-ft gash in it. After bringing in three engineering firms to analyze the structure and what happened, they found the auxiliary cables were defective at their sockets. Multiple replacement auxiliary cables were set to arrive in December.

Unfortunately, on November 6, a main cable attached to Tower 4 broke unexpectedly, when carrying just over 60 percent of its minimal load. According to engineering assessments over the years and historical maintenance records of the telescope, this cable should not have broken. After this break, the engineering firms reassessed the situation, and found that “all of the cables are considered suspect,” said Ashley Ashley Zauderer, Program Director for Arecibo Observatory at NSF, at the press conference. These four main cables were installed in the 1960s when the telescope was built, and they’ve been through tropical storms, earthquakes, and other environmental conditions that may have made them no longer capable of supporting the loads they were decades ago designed to carry.

“Tower 4 has four remaining cables out of the original six,” says Ralph Gaume, Director of NSF’s Division of Astronomical Sciences. “Engineers have advised us that the break of one more cable [on Tower 4] will result in an uncontrolled collapse of the structure. What that means is the entire 900-ton platform will come crashing down into the main dish.”

They are now starting to develop a plan to bring down the platform in a safe and controlled way, to preserve the remaining buildings onsite and minimize risk to the crew and staff. “We’re working against the clock to develop plans for a controlled decommissioning, with priorities being safety and preservation of the rest of the assets of the observatory” said Gaume.

The 1,000-foot telescope has been a crucial fixture in radio astronomy and solar system radar research for decades. This is not the end anyone wanted for this telescope.