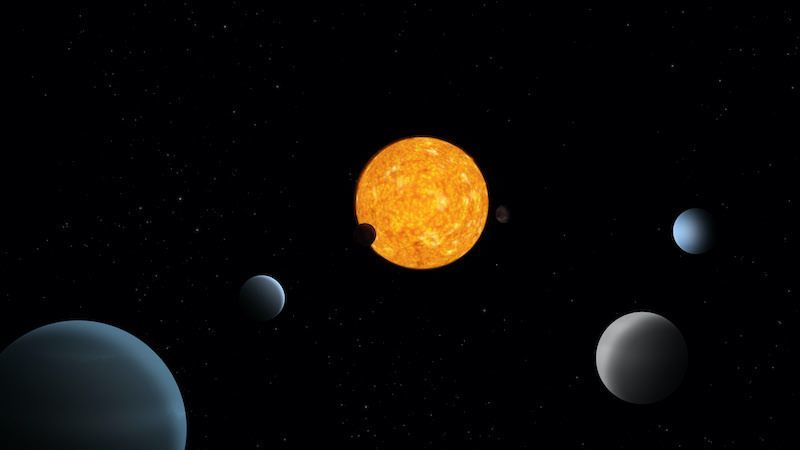 Image: The TOI-178 system has a star slightly cooler than the Sun and six exoplanets, where five of them have resonant orbits. [ESA illustration]

Astronomers have discovered thousands of planetary systems beyond our own, and each seems to add further variety to the types of systems that can exist. One such system, described in a forthcoming Astronomy & Astrophysics, holds six exoplanets orbiting a star some 200 light-years away. And a pattern of resonances governs five of those planets, meaning those five outer worlds orbit their orange star in harmony.

NASA’s TESS exoplanet hunter first discovered this star, known as TOI-178, dimmed from three worlds eclipsing it. Two of those three exoplanets curiously had very similar orbits to each other, so researchers used several ground-based telescopes and one satellite to study the system further. The satellite, a mission called CHEOPS from the European Space Agency, launched in late 2019 specifically to follow-up on interesting exoplanet finds.

By September of last year, CHEOPS had looked at TOI-178 three times. In that data, astronomers found four planets with orbits following a mathematical pattern, and they realized there should be one more in that same pattern. An October observation and subsequent analyses found that world. The star also hosts a sixth planet, closer to the star than the five that participate in the resonance pattern.

The five exoplanets in resonance follow a pattern of 18:9:6:4:3, meaning the second planet from the star (the innermost world of the pattern) completes 18 orbits in the amount of time the next planet (the third overall) completes nine, and so on. This planetary dance reveals to astronomers generalities of the system’s evolution. "The orbits in this system are very well ordered, which tells us that this system has evolved quite gently since its birth,” said co-author Yann Alibert from the University of Bern in a press statement.

But while the resonances can tell astronomers about the system’s evolution, the makeup of the planets themselves reveal something surprising. To learn about the planets’ densities, which tells astronomers about their makeup, researchers used a different telescope to measure the gravitational pull from the planets on their star. The two innermost planets are both dense, rocky worlds, Earth. But TOI-178’s third planet is gaseous, like a mini-Jupiter. Scientists are puzzled as to how a dense world can sit so close to a gaseous planet. “This contrast between the rhythmic harmony of the orbital motion and the disorderly densities certainly challenges our understanding of the formation and evolution of planetary systems,” said Adrien Leleu, from the Université de Genève and the University of Bern, in a press statement.

With more than 4,300 exoplanets in more than 3,200 systems, many are bound to challenge astronomers’ theories.