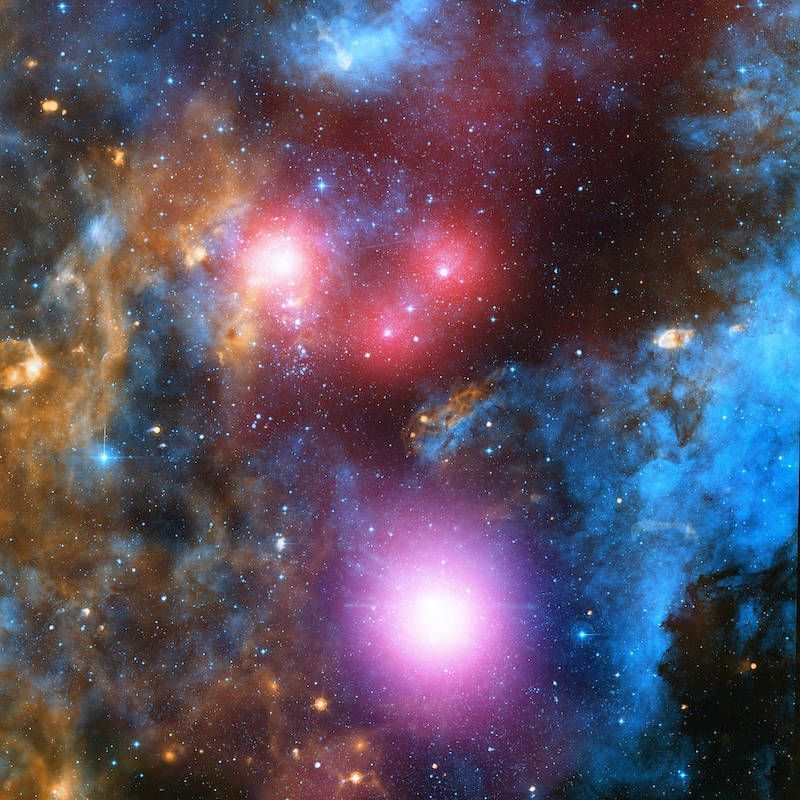 A dozen celestial locations in our Milky Way Galaxy boost particles to extreme energies, said astronomers in the May 17 issue of Nature. The Large High Altitude Air Shower Observatory (LHAASO), still under construction in the mountains of China’s Sichuan Province, detected hundreds of so-called ultra-high-energy (UHE) gamma rays. This work and another collaboration’s using the High-Altitude Water Cherenkov (HAWC) Gamma Ray Observatory in the desert mountains of Mexico have tracked the sources of these gamma rays to near the remnants of star explosions and also to clusters of massive stars.

LHAASO uses three interconnected detectors working in tandem to scour the sky for signs of UHE gamma rays and cosmic rays. Gamma rays are the most energetic form of light, and LHAASO detects light photons that have as much energy as trillions to quadrillions (that’s a 1 followed by 15 zeroes) times that of visible light. In fact, the observatory detected the highest-energy photon ever seen, with 1.4 x 1015 eV (where visible light is between 2 and 3 eV), coming from the proximity of massive star cluster Cygnus OB2.

HAWC also detected UHE gamma rays from the same region. That discovery appeared in the March 11 issue of Nature Astronomy.

Massive stars in the Cygnus OB2 star cluster harbor strong winds, and perhaps the turbulence among those winds trap particles, accelerate them to extreme energies, and then send them across the galaxy. These particles, called “cosmic rays,” are electrically charged and thus interstellar magnetic fields deflect their paths, which means astronomers struggle to trace those particles back to their sources. However, those cosmic rays interact with material nearby their creation sites. Those interactions generate gamma rays, which are electrically neutral like all light photons. This means when astronomers detect gamma rays, they can trace the radiation back to their starting sites and where cosmic rays are accelerated — which is what both the LHAASO and HAWC teams did.

The LHAASO team wrote in their paper, that the dozen ultra-high-energy cosmic-ray sources are just the tip of the iceberg, and “it is likely that the Milky Way is full of these perfectly designed particle accelerators.” With this observatory, HAWC, and other large detectors looking for UHE gamma rays and cosmic rays, astronomers expect to learn more about the sites of these cosmic extremes.