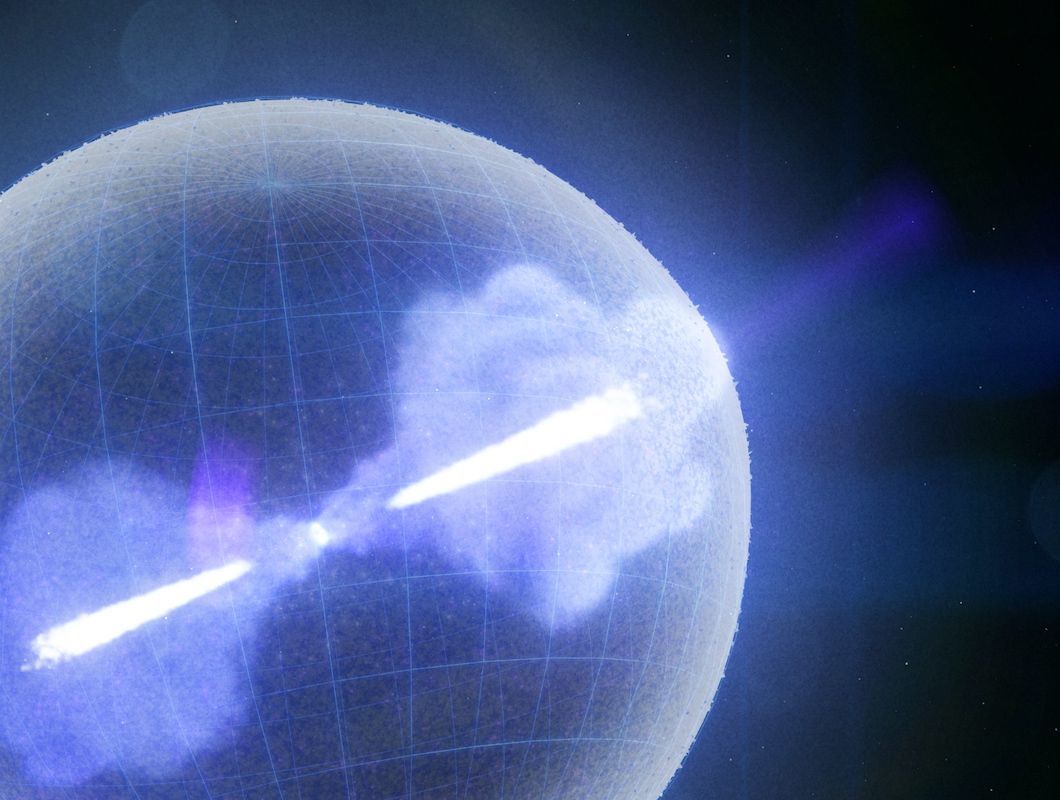 A peculiar short-duration gamma-ray burst appears to have released jets for only about 1 second as it collapsed, shown in this artistic simulation. [NASA’s Goddard Space Flight Center/Chris Smith (KBRwyle)]

Explosive signals called gamma-ray bursts (GRB) are the most energetic blasts detected. For decades, astronomers have catalogued these bursts into two classes: long-duration, lasting 2 seconds up to a few minutes and signaling a massive star’s explosion-then-collapse into a black hole; and short-duration, a gamma-ray blast less than 2 seconds and signaling a collision between two compact objects (neutron stars or black holes). In both cases, the initial gamma-ray signal is from a jet of radiation and high-speed material beamed out of the source and aimed at Earth’s telescopes. A GRB detected last year, however, looks a bit like both types at the same time. Two papers in the July 26 issue of Nature Astronomy describe this weird GRB, and what it might mean for understanding such bursts.

In August 2020, multiple space-based gamma-ray detectors collected roughly 1 second of gamma rays, the most energetic form of light, signaling a GRB. Over the next several hours, telescopes sensitive to other types of light helped triangulate the GRB’s location and further study the source. They saw fading X-rays and a varying radio signal, both of which are typical in the so-called “afterglow” of a long-duration GRB. (The afterglow is a result of the jet passing through intervening material, energizing it and making it glow.) But with the short initial gamma-ray spike, this burst, known as GRB 200826A, has surprised astronomers.

For years, some scientists have suspected GRBs detected with modern instruments aren’t all being catalogued correctly. And that might mean some of the short-duration bursts seen over the past decade are actually from massive-star collapse and not from mergers. In fact, one of the research teams who studied GRB 200826A wrote in their Nature Astronomy paper: “This burst confirms the existence of short-duration GRBs with stellar core-collapse origin, and presents some challenges to the existing models.”

The other team argues in their paper this GRB “appears to sit on the brink between a successful and a failed collapsar.” Perhaps long-duration GRBs are the result of a collapsing massive star with powerful jets, and some of the short-duration variety arise when the jets aren’t strong enough to sustain themselves.