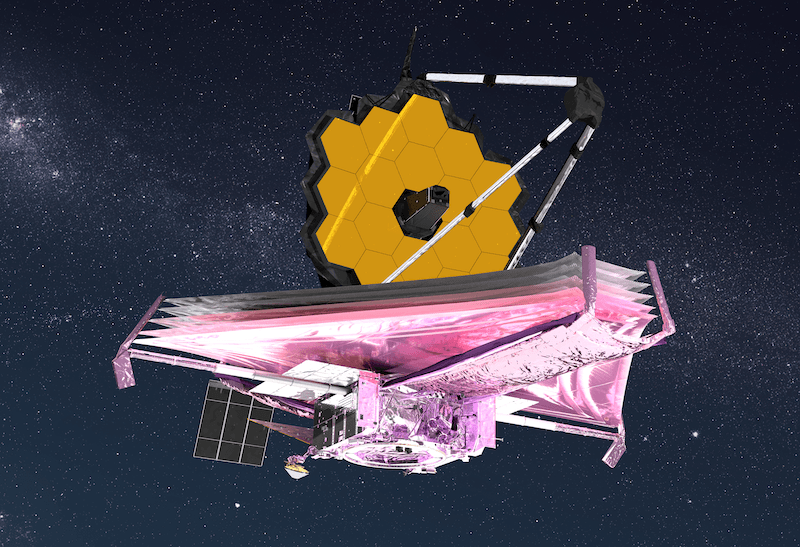 The James Webb Space Telescope is now in its final configuration, as shown in this artist’s illustration. [NASA GSFC/CIL/Adriana Manrique Gutierrez]

This past Saturday, the newest space telescope successfully deployed its primary mirror’s second side panel, marking the end of its extremely complex deployment sequence. The James Webb Space Telescope (JWST) is now fully unfolded, and the astronomy community around the world has emitted a collective sigh of relief.

JWST is the largest telescope in space, so large that it couldn’t launch in its final configuration. Instead, its 21-feet-wide (6.5 meters) primary mirror had to be built as 18 separate hexagons and attached on a folding structure. Because the telescope sees infrared radiation, which is redder and cooler than the optical light our eyes can see, it needs an enormous lightweight sunshield to block the heat of our planet and the Sun. The mirror and its five-layer tennis-court-sized sunshield had to be folded to fit in the rocket fairing, and that meant a precise and extremely complex deployment sequence had to occur in space. With hundreds of potential breaking points, everything succeeded.

According to NASA, unfolding and tensioning the five-layer sunshield involved 139 of JWST’s total 178 release mechanisms. This process took several days, between December 28 and January 4. The secondary mirror — a crucial part of the optics of any telescope — was deployed January 5. Then on January 7 and 8, the mission team deployed the two side wings of the primary mirror. “Each feat already achieved and future accomplishment is a testament to the thousands of innovators who poured their life’s passion into this mission,” said NASA Administrator Bill Nelson in a press statement issued January 8. If you want more detail about each of the deployment steps JWST has undergone, NASA has a great website.

Even though the full telescope is fully deployed, it’s not yet ready to observe the cosmos. The JWST team now needs to adjust the curvature of each of the telescope’s 18 hexagonal mirrors, by adjusting 126 actuators, which control said mirrors; the goal is for the segments to see as one large primary mirror. The spacecraft also has another 180,000 miles to travel in two weeks, before it undergoes a course correction insertion burn. Then, it will be in its science orbit around the gravitationally stable point in space called L2. After another several months of testing and calibrating its science instruments, aligning its optics, and cooling down to temperature, it can begin studying the cold and distant universe. I cannot wait to learn what JWST sees.