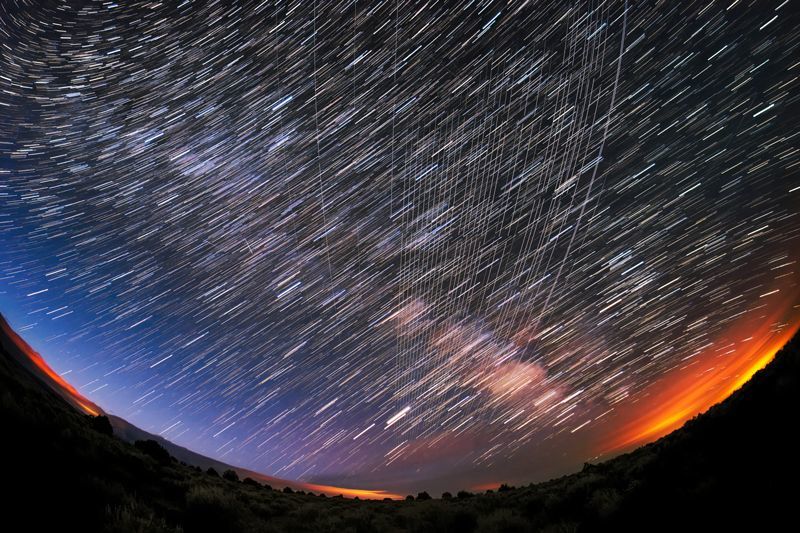 The trails of dozens of satellites (part of the Starlink constellation being built by SpaceX) interfere with the trails of hundreds of stars in this photograph, taken of the sky above Carson National Forest, New Mexico. [M. Lewinsky/Creative Commons Attribution 2.0]

Over the past few years, the night sky has become a crowded place. Constellations of new satellites traverse across the sky, impeding humans’ views of the actual stellar constellations and interfering with optical and radio astronomy research. In response to these negative effects, the International Astronomical Union (IAU) has established the Centre for the Protection of Dark and Quiet Skies from Satellite Constellation Interference. The IAU announced this new center and its hosts — the Square Kilometre Array Observatory (SKAO) and the National Science Foundation’s National Optical-Infrared Astronomy Research Laboratory (NSF NOIRLab) — in early February.

The SKAO is the organizational group leading the upcoming SKA project, an enormous radio observatory that will be split between two sites: South Africa’s Karoo and Australia’s Murchison Shire. As a co-host of the new IAU center, SKAO will focus on radio interference from the satellite constellations.

NOIRLab is a United States center focusing on ground-based optical astronomy, and it leads several large observatories like the Gemini Observatory and the upcoming Vera C. Rubin Observatory. As a co-host of the IAU center, NOIRLab will lead work protecting the optical part of the spectrum from interference.

“The new Centre is an important step towards ensuring that technological advances do not inadvertently impede our study and enjoyment of the sky,” said IAU President, Debra Elmegreen in a press statement. “I am confident that the Centre co-hosts can facilitate global coordination and bring together the necessary expertise from many sectors for this vital effort.”

In fact, the center has already submitted a paper to the United Nations Committee on the Peaceful Uses of Outer Space to limit technologies that impede professional scientists’ ability to understand our place in the universe and human beings’ enjoyment of, and inspiration from, the night sky.