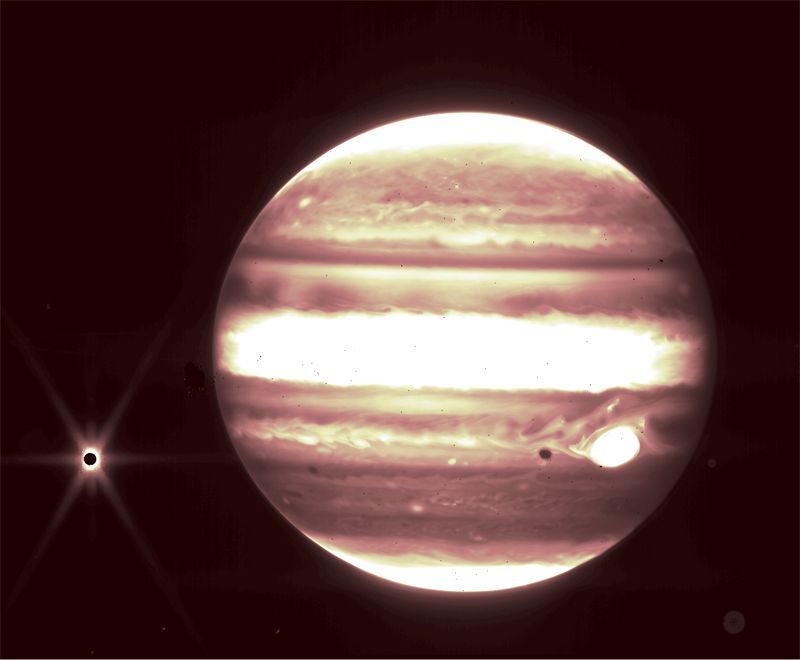 Over the past couple days, you’ve likely seen the first stunning images from the James Webb Space Telescope (JWST). An upcoming article in Mercury magazine will dive into those images in far more detail. The JWST team also has released the telescope’s commissioning data. Included in that release is this image of Jupiter, captured by the telescope’s Near Infrared Camera (NIRCam) instrument, and specifically through a 2.12-micron filter. At the planet’s left is its icy Galilean satellite Europa.

While JWST will be an important tool in planetary science and understanding our own solar system, the main reason for this commissioning image of Jupiter actually relates to the telescope’s tracking ability. The planet — and any relatively nearby astronomical object, including those in our Solar System — move across the sky. JWST needs to be able to track such targets. The team also tested the observatory’s tracking ability when it observed asteroid 6481 Tenzing.

According to NASA, the telescope’s design specifications are to stably track objects that move fast enough to cover 30 milliarcseconds of sky in one second. The JWST team has shown the telescope is tracking better than twice that: objects moving as fast as 67 milliarcseconds of sky in one second. “Everything worked brilliantly,” said Stefanie Milam, Webb’s deputy project scientist for planetary science based at NASA’s Goddard Space Flight Center in Greenbelt, Maryland, in a NASA blog post.

Also in that commissioning data are images of Jupiter’s rings (!) and several other faint moons, and a whole bunch of other targets. The astronomical community is now poring through that data to see what they can uncover, so we’ll likely here more soon.