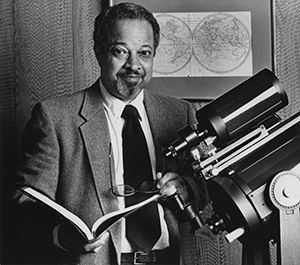 Arthur B.C. Walker II (1936 – 2001), Professor of Physics and Applied Physics at Stanford University, was a renowned and highly respected aerospace engineer and solar physicist. While at Stanford, Arthur was an active member of the Center for Space Science and Astrophysics and chaired the Astronomy Program from 1977 until 1980. His most significant contribution to academic life at Stanford was mentoring under-represented graduate students in science, namely women and African Americans. Among these students was Sally Ride, the first female U.S. astronaut. He was also a leader of the African-American community at Stanford and the longest serving member of the advisory committee for the Afro-American studies program. He served as a role model for many of the young African-American assistant professors including Condoleeza Rice. President Ronald Reagan selected Dr. Walker (along with Neil Armstrong and other luminaries) to chair the most important committee in the history of the U.S. space program, the commission investigating the space shuttle Challenger explosion.

NASA recognized his lifetime of service during a combined meeting of the National Conference for Black Students and the National Society of Black Physicists in 2001. Dr. Walker’s devotion to science and service encouraged and promoted African Americans to enter physics as a profession at all levels.