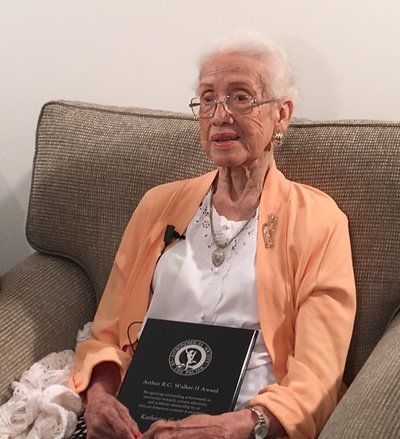 Katherine Johnson, renowned NASA mathematician who calculated and verified the trajectories that took the first Americans into space and to the Moon, and Presidential Medal of Freedom recipient, was the inaugural recipient of the Astronomical Society of the Pacific’s Arthur B.C. Walker II Award.

The Arthur B.C. Walker II Award recognizes outstanding achievement by an African American in astronomy and for actively promoting diversity in science. Her family accepted the award on her behalf on October 22, 2016 during the ASP’s Annual Awards Gala in Burlingame, California. Katherine Johnson received the Presidential Medal of Freedom from President Barack Obama in 2015.

Katherine Coleman Goble Johnson (August 26, 1918 - February 24, 2020) was a space scientist and mathematician who made major contributions to aeronautics for NASA’s space programs from 1953 to 1986. Known for the accuracy of her orbital calculations, she determined the trajectory for Project Mercury and the 1969 Apollo 11 flight to the Moon.

When NASA used electronic computers for the first time to calculate John Glenn’s orbit around Earth, Glenn insisted that she verify the computer’s numbers. NASA dedicated the Katherine G. Johnson Computational Research Facility at the Langley Research Center in Hampton, Virginia on May 5, 2016. This occurred on the 55th anniversary of Alan Shepard’s historic rocket launch and splash down, which Katherine Johnson helped make possible through her orbital calculations. After retiring from NASA, Johnson dedicated herself to inspiring young people to pursue careers in science, mathematics, and engineering.