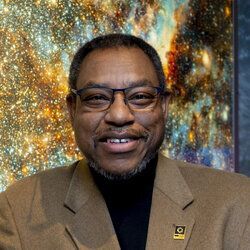 Derrick Pitts has been associated with The Franklin Institute since 1978, where he is currently Chief Astronomer and Director of the Fels Planetarium at The Franklin Institute designing and presenting many of the museum’s public programs and exhibits. A NASA Solar System Ambassador since 2010, he also served as NASA’s first ‘Astrobiology Ambassador’ for the UNCF’s Astrobiology Partnership Program and at the invitation of Space Shuttle astronauts, has flown items of his own creation on two different flights. Pitts appears regularly as a science content expert for most national and international media outlets including NOVA, BBC, Discovery Channel, Science Channel, History Channel, and Curiosity Stream. He has received numerous awards including honorary degrees from LaSalle University, Rowan University and Wagner Free Institute. Pitts serves as a Board member for his alma mater St. Lawrence University, Astronomical Society of the Pacific and Associated Universities, Inc. His Twitter handle is @CoolAstronomer and his motto is ‘Eat, breathe, do science. Sleep later.’