Big Astronomy: People, Places, Discoveries - Behind the scenes with the project team 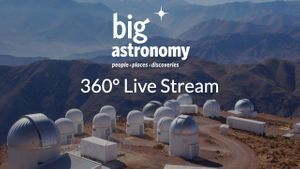 Join us as we host a special LIVE Big Astronomy Planetarium Show and Panel Discussion on opening night of the conference.

The California Academy of Sciences has created a new planetarium show wrapped in an ecosystem of support, from live interviews to informal activities. Learn about how this NSF-funded project centers the people behind science in a new outreach environment.  The 30-minute Planetarium show will be followed by a Panel Discussion. Meet the people who bring us the big discoveries in astronomy - visit the mountains of Chile where the world's largest telescopes are re-imagining our place in the universe.

Hosted by Vivian White (Astronomical Society of the Pacific)

The ASP welcomes a pay-as-you-can donation for this LIVE EVENT. It is open to the public and invited guests of the ASP2020: A Virtual Conference.