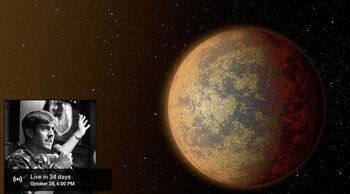 What is an exoplanet?

An exoplanet is any planet beyond our solar system. Most orbit other stars, but free-floating exoplanets, called rogue planets, orbit the galactic center and are untethered to any star. Most of the exoplanets discovered so far are in a relatively small region of our galaxy, the Milky Way. We know from NASA’s Kepler Space Telescope that there are more planets than stars in the galaxy.

By measuring exoplanets’ sizes (diameters) and masses (weights), we can see compositions ranging from very rocky (like Earth and Venus) to very gas-rich (like Jupiter and Saturn). Exoplanets are made up of elements similar to those of the planets in our solar system, but their mixes of those elements may differ.

Now we live in a universe of exoplanets. The count of confirmed planets is in the thousands and rising. That’s from only a small sampling of the galaxy as a whole. The count could rise to the tens of thousands within a decade, as we increase the number, and observing power, of robotic telescopes lofted into space.

Night Sky Network members can help in the study of exoplanets by observing them with your own telescope and camera and participating in the citizen science project Exoplanet Watch!
----------------------
About Dr. Robert Zellem

Rob is a scientist at NASA’s Jet Propulsion Laboratory working on ground- and space-based observations of the atmospheres of exoplanets, planets outside of our Solar System. He has observed and worked at major observatories and is involved with developing simulations to predict the ability of NASA and ESA exoplanet-dedicated missions to measure exoplanet atmospheres. Rob also is active in leading citizen science projects to help aid in the characterization of exoplanets.