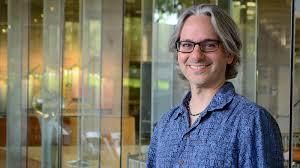 OSIRIS-REx is a NASA New Frontiers-class mission to collect a sample of the carbonaceous near-Earth asteroid (101955) Bennu and return it to Earth for analysis. Over the past two years, OSIRIS-REx has studied the surface and near-space environment of Bennu in depth. This webinar will provide an update on the progress of the mission as well as present many of the exciting discoveries made at Bennu.

About Carl Hergenrother
Carl Hergenrother is an observational astronomer at the University of Arizona’s Lunar and Planetary Laboratory specializing in the study of comets and asteroids. He is a member of the Science team of the NASA OSIRIS-REx mission. As OSIRIS-REx, he was responsible for leading the effort to select and remotely characterize Bennu, monitoring the near-Bennu space for ejected particles, and helping coordinate the Target Asteroids! citizen science project. Carl is an avid backyard observer where his “go to” equipment are a pair of 30x125 binoculars. He enjoys visually observing comets, meteor showers, and galactic novae and is also the Comets Section Coordinator and Associate Director of the Association of Lunar and Planetary Observers (ALPO).