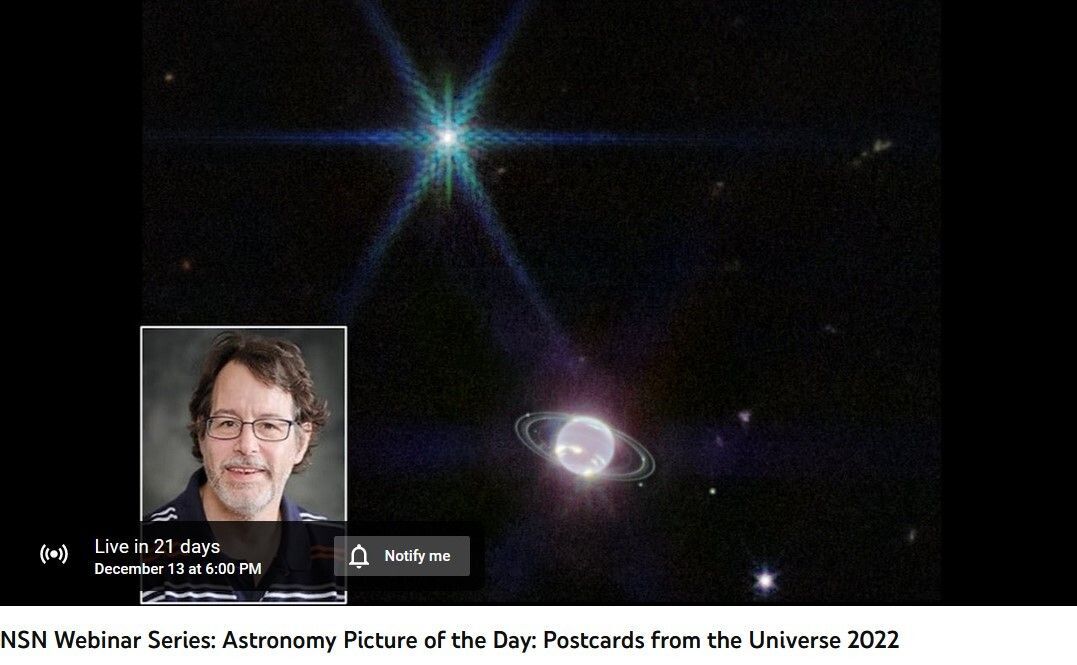 Please note: this event was originally scheduled for December 13, 2022 and has been rescheduled to January 24, 2023.

Join the Night Sky Network and Robert Nemiroff on Tuesday, January 24, 2023 at 6pm Pacific/9pm Eastern for a tour of the highlights from the Astronomy Picture of the Day archive for 2022.

Along with Jerry Bonnell, Robert Nemiroff has written, coordinated, and edited NASA’s Astronomy Picture of the Day (APOD) since 1995. The APOD archive contains the largest collection of annotated astronomical images on the internet.

Speaker Information
Dr. Robert Nemiroff is a professor of physics at Michigan Tech. He worked at NASA’s Goddard Space Flight Center in Maryland before coming to Michigan Tech. He is perhaps best known scientifically for papers predicting, usually among others, several recovered microlensing phenomena, and papers showing, usually among others, that gamma-ray bursts were consistent with occurring at cosmological distances. He led a group that developed and deployed the first online fisheye night sky monitor, called CONCAMs, deploying later models to most major astronomical observatories. He has published as first author and refereed for every major journal in astronomy and astrophysics. His current research interests include trying to limit attributes of our universe with distant gamma-ray bursts, and investigating the use of relativistic illumination fronts to orient astronomical nebulae.

In 1995, Dr. Nemiroff co-created the Astronomy Picture of the Day (APOD) with main NASA website at http://apod.nasa.gov/. If you are a fan of APOD, please consider joining the Friends of APOD at http://friendsofapod.org/.

apod.nasa.govapod.nasa.gov
A different astronomy and space science
related image is featured each day, along with a brief explanation.

apod.nasa.govapod.nasa.gov
A different astronomy and space science
related image is featured each day, along with a brief explanation.