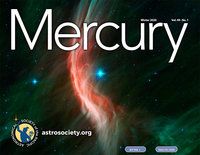 A rundown of some of the most exciting developments in space and time.

Take a close-up view of our Sun’s photosphere and admire a massive asteroid fit for the driving range.

A quartet of space probes is heading to Mars soon looking to answer lots of new questions—and an old one.

After 16 years of reshaping our view of the infrared universe, NASA’s “little telescope that could” has been decommissioned.

This Is Goodbye (for now)

In Memory of Katherine Johnson

The “Black Death Scapegoat Conjunction” of 1345

How Much Do We Actually “Weigh”?

Time for “T” on Mars

This year kicks off a busy decade for Mars. Four missions will transport two landers, three rovers, and two orbiters to the Red Planet, taking advantage of the biennial alignment that makes for a shorter trip. More capable instruments will tackle new science questions and dig deeper into an old one: was there ever life on Mars?

The mood was bittersweet as hundreds of scientists, engineers, friends and family spilled into the Jet Propulsion Laboratory’s (JPL) Pickering Auditorium on January 30th in Pasadena, Calif. The crowd itself was a testament to the mission they’d come to celebrate: the Spitzer Space Telescope. Described by many involved with the project as the “little telescope that could,” Spitzer was a telescope that pushed scientific boundaries and, for many in the auditorium that day, spanned a significant part of their lives and scientific careers. After a successful (and, at times, harrowing) 16-years on the job, Spitzer was placed into safe mode and the mission was declared finished at 2:30 p.m. PST.

Published since 1972, Mercury Magazine is now published four times a year for ASP Members and Institutional Subscribers. The Mercury Archives offer a table of contents for each of the digital issues going back to 2007. Members and Subscribers have access to the complete digital library of the full magazines.

Not an ASP Member? Join today to enjoy a full year subscription, an archive of digital issues since 2007, as well as other benefits.

Institutional Subscribers must access the full library of digital issues through your Institution.

Mercury now has a voice beyond its Members as we launch Mercury Online, featuring our recognized columnists, current space news, and more in a new and up-to-date blog format.

"We live in turbulent yet exciting times, so it is our hope that Mercury Online will showcase humanity's drive to explore by delivering high-quality  articles for members and nonmembers alike." — Ian O'Neill, former Editor, Mercury magazine and Mercury Online