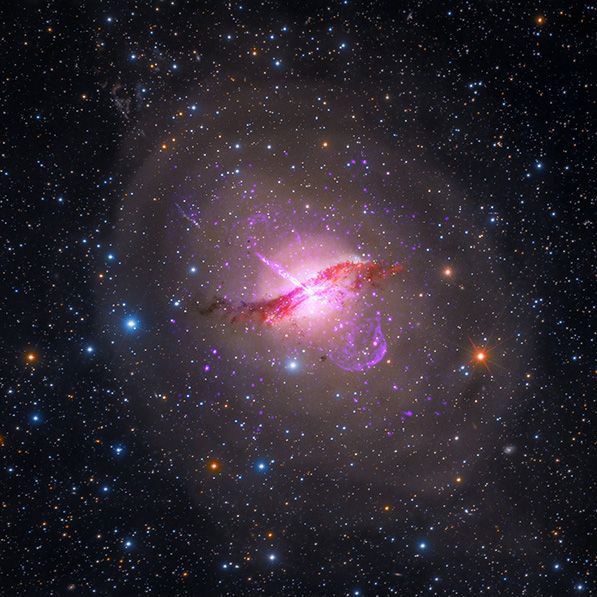 I often think of black holes like I think of sharks in the ocean: beautiful and elusive in the vast depths, yet terrifying and symbolic of a violent end. Most of the time black holes are brought up in pop culture, they’re either the tools of the savvy space-time traveler looking for a wormhole that pops you out into a distant universe, a mass by which you can slingshot your failing ship around to get home sooner, or they’re simply a looming death trap. Fortunately, as an astrophysics graduate student here on Planet Earth, I can use the tools of the trade to study these objects at a safe distance.

Yet, I am not immune to the effects of black holes—none of us are.

While our galaxy is dotted with millions of black holes that have masses like that of a star, at the center of nearly every galaxy in the known universe resides a supermassive black hole. These objects have masses on the order of millions, and sometimes up to billions, of stellar masses. Our own supermassive black hole, affectionately referred to as Sagittarius A* (Sgr A*) due to its proximity to the Sagittarius constellation, is about 27 thousand light-years away and has a mass of around four million Suns. Our galaxy is about a hundred thousand light-years in diameter, and Pluto is about eight light-minutes from us, so Sgr A* is fairly distant.

If it is so far away, how is it that it affects us every second of every day? The answer is gravity, in two ways.

Black holes are possibly the most unique objects in the universe, partly because they are only influenced by gravity, not radiation. In fact, that’s what makes them ‘black’—their incredible mass has such a strong gravitational pull that even the light whizzing by it from nearby stars gets sucked in. This mass is believed to be one of the main ‘cogs’ in the wheel of our galaxy, helping to keep it all together. But the real consequences of living a supermassive black hole life can only be understood on time scales that our human lives can’t grasp.

If you think of the age of the universe as a calendar year with the Big Bang occurring on Jan. 1 at 12 a.m. and our current present day being 11:59 p.m. on Dec. 31, galaxies and black holes started forming somewhere around Jan. 22. Unfortunately, there is still a heated debate as to how the first black holes formed: some believe they have to be the remnants of the first stars after they ran out of fuel and went supernova, whereas others believe some black holes could form almost instantaneously if there was enough gas in a confined space to collapse in on itself. It’s likely a combination of both and, as the field of gravitational wave astronomy blossoms, we hope to have a better, more specific idea in the near future.

Like any symbiotic relationship, one must wonder: what does each party get out of this?

We know supermassive black holes are part of the glue that keeps a galaxy together, but what does the galaxy give to the black hole? The answer: mass.

When a supermassive black hole is growing by actively consuming nearby matter, be it dust, gas, or unfortunate nearby stars, we refer to it as an active galactic nucleus, or AGN. Now, occasionally, a cloud of gas flies into Sgr A*, but otherwise the stars around our own supermassive black hole are in a generally stable orbit, much like the planets orbiting the Sun in our solar system. So, Sgr A* is not, by definition, an AGN. At least not right now.

See, it takes a lot to be classified as an AGN; specifically, it takes a lot of radiation. In fact, AGN emit more radiation across the entire electromagnetic spectrum than all of the stars in its host galaxy combined. This makes AGN individually the most powerful objects in the universe. All that power beaming out from such an incredibly tiny region within a galaxy means that when we go to observe that galaxy at any wavelength, the image is often dominated by a very bright, tiny dot at the center (hence the term ‘nucleus’). And hiding in that nucleus is a supermassive black hole surrounded by hot gas and dust rushing towards an imminent fate.

But how did the gas and dust get there in the first place? Gravity: part two.

The first black holes and galaxies in the universe were likely smaller than our Milky Way today. They grew over time as they merged together, driven by their mutual gravitational attraction. Simulations of these merging scenarios detail beautiful tangos where galaxies swing past one another, barely touching the first few times, but eventually slamming into each other forming one single larger galaxy that comes complete with a single larger black hole. The new supermassive black hole has a larger appetite due to its larger mass. As the dust literally settles within the new galaxy, it’s dragged toward the nucleus where a looming beast awaits its feast.

The gas and dust get closer to the black hole, orbiting faster and faster, getting squeezed into the shape of a disk by angular and gravitational forces. This disk is the metaphorical feedbag of the black hole, providing all the matter it needs to consume and grow. The disk is also incredibly hot, and its ultra-fast circular motion blasts hot winds of radiation across the entire galaxy.

All this dust-dragging and radiation-blasting is great for the supermassive black hole, but it comes at a price. The matter that was dragged into the nucleus could have instead helped form brand new stars for the galaxy. The winds blasting off the disk may disturb or sweep away potential stellar nurseries (a.k.a. clouds of cold gas and dust), again depriving the galaxy of any new star formation. In fewer cases, AGN produce two very powerful opposing jets that shoot material out of the entire galaxy and into the void.

Simulations show that over time these effects essentially slow or completely prevent new stars from forming within the galaxy. If new stars don’t form, then gas and dust production slow from the lack of supernovas. If gas and dust production slow, then the supermassive black hole has nothing to feed on. Theoretically, this cycle continues until either another dusty galaxy comes along and merges with the dying one, or until new stars stop forming altogether and the black hole is forced to live hungry and in dark isolation.

Observing the relationship between AGN and star formation is difficult. As humans, we are simply not alive long enough to watch this interplay happen. To make matters worse, observing AGN and star formation processes is quite complex. Baby stars are hidden in clouds of warm gas and dust and AGN are surrounded by warm gas and dust. Thus, researchers often quantify how much star formation is going on by looking for warm dust; but, one can also judge how powerful an AGN is by observing how much warm dust is present. So, it’s important that we can separate the two processes when we are observing a galaxy far away.

My current research is focused on studying large numbers of AGN living in star-forming galaxies to find a reliable way to detangle these processes. Astronomers can use these results to get us a step closer in understanding how soon after an AGN ignites are the effects most powerful on the galaxy, and at which “point of no return” can a galaxy be officially diagnosed as dying.

Image: Centaurus A is the fifth brightest galaxy in the sky dominated by the light generated by the active supermassive black hole in its core. This is a composite image of the galaxy incorporating optical, X-ray and infrared wavelengths [X-ray: NASA/CXC/SAO; Optical: Rolf Olsen; Infrared: NASA/JPL-Caltech]