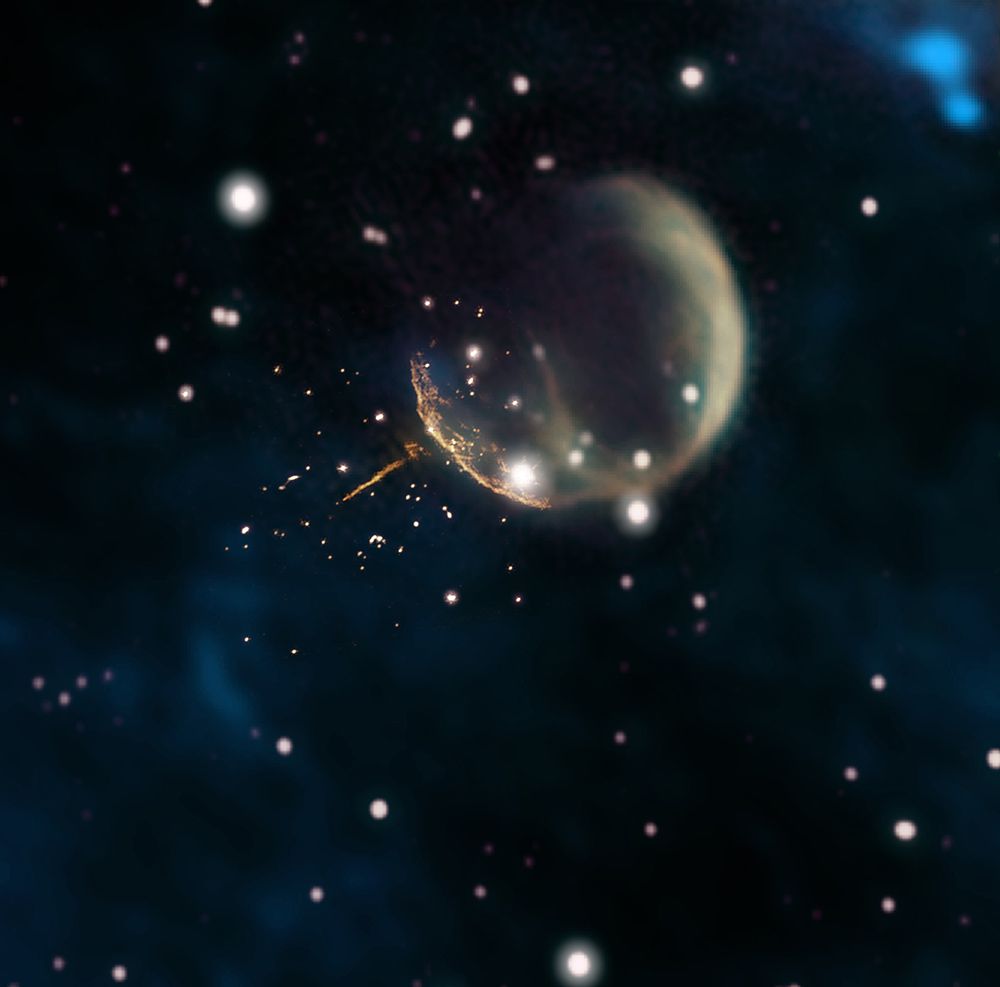 What’s careening through the galaxy at 2.5 million miles per hour and screaming with gamma-rays? Discovered by NASA’s Fermi Gamma-ray Space Telescope and the Very Large Array (VLA) in New Mexico, this bizarre object is a pulsar that’s been blasted clear of where it was born and is now on an epic journey through interstellar space, doomed to be exiled from our galaxy forever.

Pulsars are rapidly-spinning neutron stars that generate extremely intense beams of radiation from their magnetic poles. Should these beams sweep across our field of view, they appear as a flash, and in the case of pulsar J0002, it’s at spinning nearly nine times a second, producing a flash of gamma-ray radiation on each rotation. It was originally found in 2017 via the citizen science project Einstein@home, which uses idle processing time on home computers to detect the gamma-ray emissions from Fermi. The project has detected 23 gamma-ray pulsars to date, but J0002 is one of the most extreme.

Resembling a dart shooting from a bubble-like supernova remnant called CTB 1, the origin of this pulsar obvious: it was created when a massive star ran out of fuel and exploded some 10,000 years ago. But for reasons that aren’t entirely clear, it was kicked from the explosion at high speed—it’s now located 13 light-years from CTB 1. One hypothesis is that when the supernova detonated, there was a clump of dense matter that gravitationally interacted with the pulsar, sling-shotting it away at high speed.

It’s interesting to think that, for 5,000 years, the pulsar would have been completely enveloped inside the expanding supernova remnant, as the cooling gases rapidly expanded much faster than the pulsar’s pace. As the remnant’s outer shell interacted with the tenuous interstellar medium, however, it experienced drag and slowed it down. The pulsar, being an ultra-dense stellar lump of degenerate matter, is like a cannonball, cutting through the tenuous interstellar gases as if it isn’t even there. The “cannonball pulsar” therefore emerged from the shell five millennia ago, overtaking the slower supernova’s cooling remnant.

Astronomers will continue to observe this exotic object with the Very Long Baseline Array (VLBA) and NASA’s Chandra X-ray Observatory in hopes of better understanding the nature of these rare interstellar cannonballs.

Image: The pulsar can be seen as a radio-emitting dart (orange line) revealing its supernova origin. [NRAO]