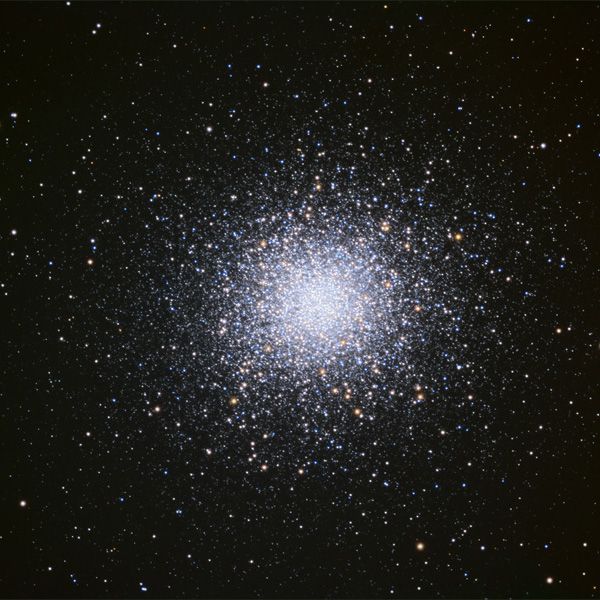 This article was originally published in the Spring 2019 (vol. 48, no. 2) issue of Mercury magazine, an ASP members-only quarterly publication..

Astronomers are, however, confident that dark matter tends to clump together in what we call dark matter halos. These halos are where all of the visible celestial action is taking place—where most, if not all, the stars, gas and dust in the Universe seem to live.

Currently, it’s believed that the only celestial systems that form inside these halos are galaxies, but what if there’s more? A controversial idea gaining ground in the astronomical community is the possibility that some globular clusters may have formed in their own dark matter halos very early in the Universe’s history.

So, a globular cluster is a spherical group of many stars—up to 1 million!—that (so far) have only been found orbiting larger galaxies. For decades it was fairly easy to tell the difference between a galaxy and a globular cluster; globulars were small and found very close to, or inside, larger galaxies and galaxies themselves were, well, larger and more massive. Then came the discovery of Ultra Faint Dwarf (UFD) galaxies—itty bitty ancient galaxies that live right in that visible-mass gap between globular clusters and previously discovered (more massive) galaxies.

In fact, it’s common for UFD candidates to need extra-detailed observations just to determine their galaxy-hood! See, UFDs are thought to be the most dark matter-dominated objects in the Universe, meaning they should have much more dark matter than visible matter (like stars). Globulars, on the other hand, were thought to contain almost no dark matter with a mass-to-light ratio of about 1-to-4. (A mass-to-light ratio is the relationship between how much mass is inferred in a system, from the velocities of its stars, say, to how much light the system puts out.) A lower mass-to-light ratio equals less dark matter, and vice versa.

This vast difference in mass-to-light ratios between UFDs and globular clusters is the main way astronomers designate one from the other. Despite these differences, when other astronomical traits are compared, globulars and UFDs appear more similar than not.

For 58 of these nearby tiny systems, researchers from Universidad de Chile looked at the relationship between the effective radius (the radius out to where half of the total light of that system is emitted) and Sérsic index (that is a relationship between intensity of emitted light and distance from the center of the system, from Marchi-Lasch et al. 2019). In this view, globular clusters with lower surface brightness and UFDs are very similar! The nature of effective radii and Sérsic index lend to the idea that these two types of celestial systems may actually form in similar ways—[spoiler alert!]—in their own dark matter halos.

While these theories do not hold for every globular cluster known, this work finds that it’s likely 50-60 percent of known nearby globular clusters formed very early in the Universe in their own dark matter halos! These exciting observational and theoretical results are helping astronomers piece together where globular clusters fit in the grand cosmological story.

As further work on this idea is conducted, we may realize that ultra-faint dwarf galaxies are not the only relics of the first stars and celestial systems created in the Universe! I’d happily welcome some globular clusters into that club.

Image: Messier 13 (M13) is one of the brightest and best-known globular clusters in the northern sky. [Adam Block/Sid Leach/Mount Lemmon SkyCenter/University of Arizona]