Turning the Moon Into a Particle Spectrometer 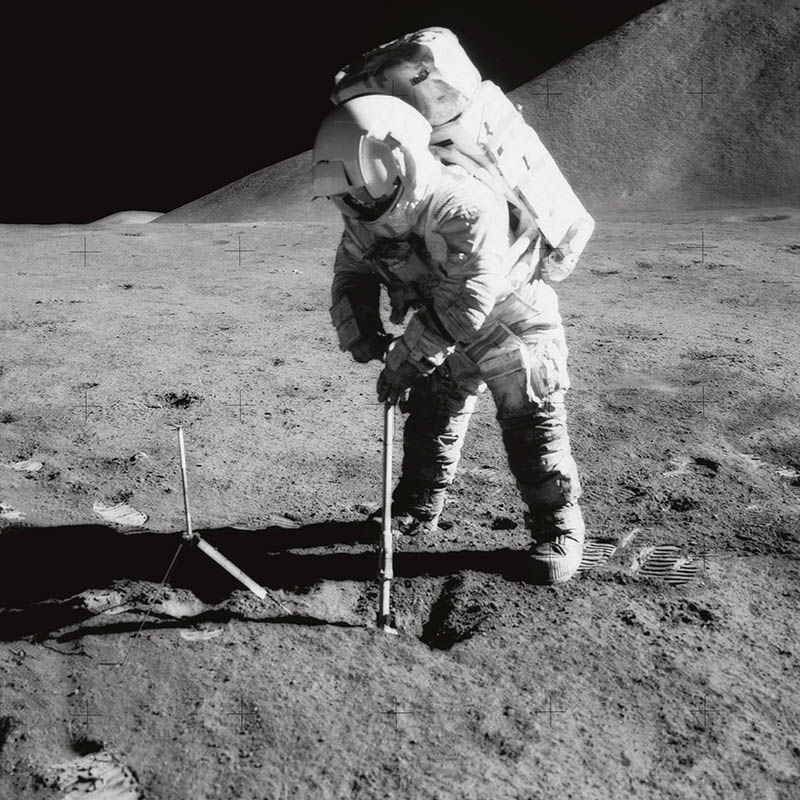 Image: Astronaut James B. Irwin uses a scoop to make a trench in the lunar soil during an Apollo 15 EVA in 1971. Data gathered during the mission help scientists today understand the composition of the lunar surface. [NASA]

Cosmic rays play an important role in the space environment.

While SEPs have lower energies (10⁷ to 10⁹ eV), they greatly outnumber higher energy (>10⁹ eV) GRCs and we have a few decades of satellite observations suggesting that higher-energy SEPs occur mainly in rare and extreme events. But, a 2014 study of solar activity found that, from 1950 to 2009, the sun was in a state of unusually high activity. This period has been dubbed the “Modern Grand Maximum” or “MGM.”

So, how well do recent satellite data represent the long-term SEP flux? The answer to this, according to a recent study by Stepan Poluianov, Gennady Kovaltsov, and Ilya Usoskin, can be found by analyzing activity of cosmogenic 26Al, a radioisotope of aluminum, on the lunar surface.

Why not use terrestrial data? Earth’s crust records only extreme SEP events: its atmosphere and magnetic field prevent the lowerenergy SEPs from reaching the ground. Due to the proximity of the sun and the sheer numbers compared to GCRs, SEPs represent the biggest threat to space-based technology. Even the low-energy SEPs, which Earth’s atmosphere blocks, can damage satellites. This makes knowledge of the SEP flux crucial to future space mission planning.

This radioactive isotope is created by spallation when cosmic rays react with target nuclei of magnesium, aluminum, and silicon. Since the half-life of 26Al is 717,000 years, the lunar particle record goes back several million years. Poluianov, Kovaltsov, and Usoskin modelled the production of 26Al by cosmic rays. They used the incident flux of different cosmic ray particles (protons, neutrons, alpha particles, etc.) on target nuclei in the lunar crust and ascertained the composition of target nuclei in the upper layers of the moon from the lunar chemical composition using the deepest portion of the Apollo 15 deep-drill sample. This allowed them to generate efficiency curves as a function of depth for the production of 14C, 26Al, 36Cl, and 10Be. They determined that 26Al would be the best bet for reconstructing the incident SEP spectrum for two reasons: the threshold energy to produce this isotope is the lowest and its production efficiency is the highest.

Both SEPs and GCRs contribute to the production of 26Al. However, GCRs have more energy and can penetrate deeper into the lunar surface. Using the reported concentration of 26Al in Apollo 15 deep core samples, they were able to subtract the GRC contribution to 26Al in two lunar surface rocks (one from Apollo 16 and another from Apollo 17). The remaining activity in the lunar surface rocks is due to 26Al produced by SEPs. The long-term GRC spectrum is well established, but it is modulated by solar activity. The researchers fitted lunar data for GRC-generated isotopes in the deep lunar layers and found that from 1951 to 2016, the mean solar activity modulation was significantly higher than that over the last 11,000 years.

This is consistent with the high solar activity associated with the MGM. Poluianov and colleagues used the measured concentrations of 26Al along with production efficiency as a function of depth to reproduce the incident SEP spectrum for energies between 20 MeV and 80 MeV. Their results indicate that the mean SEP flux appears to be independent of solar activity! In addition, they find high energy SEP events are unlikely to occur in the next several thousand years. These results help constrain solar physics and should be useful for future space mission plans.