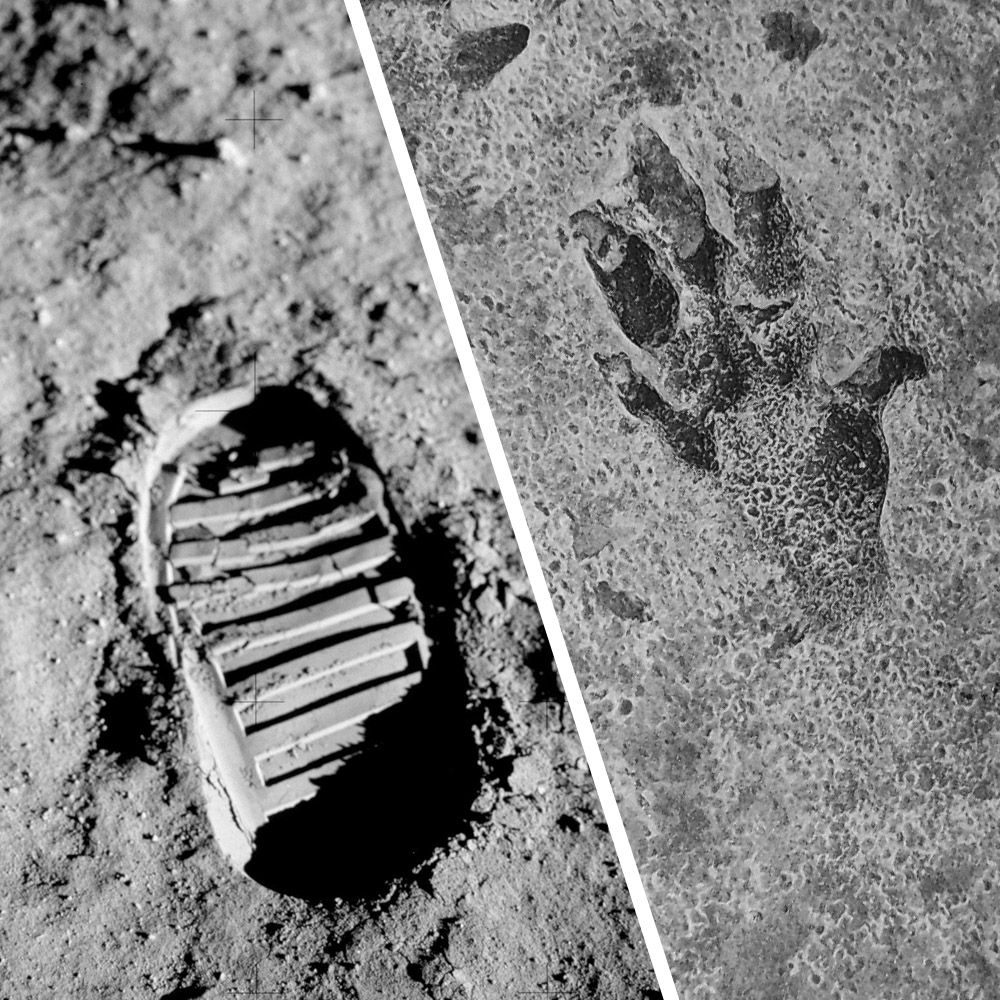 Image: Buzz Aldrin's boot print on the Moon (left) and a fossilized footprint from the Triassic period [NASA/public domain]

This article will appear in the upcoming Summer 2019 (vol. 48, no. 3) issue of Mercury magazine, an ASP members-only quarterly publication.

Imagine if all the humans on Earth suddenly disappeared.  After 65 million years, what evidence would remain to prove we were here, did astronomy, launched rockets, and investigated the great mysteries of the cosmos?  According to one of my favorite books, “The World After Us,” future alien archaeologists might find bits of plastic, but nearly everything humanity had ever built would be gone.  There would be nothing left suggesting we built computers, launched rockets into space, or observed the sky with massive telescopes.

During an ASP staff party—and after consuming a few glasses of wine—I posed a thought experiment I am still teased about. “If dinosaurs dominated the Earth for over 150 million years and became extinct 65 million years ago, how do we know dinosaurs didn’t do astronomy?”  After all, Homo sapiens have been around for only 100,000 years and in that time we’ve accomplished a lot. T. Rex had lots more time on their tiny hands.  What if dinosaurs did astronomy and explored the cosmos, but all the evidence of their accomplishments is long gone?

Human civilization arose only 5,000 years ago, but even within this short time frame most of the achievements of our ancestors have either been destroyed or buried under tons of vegetation and debris.  We know only some of our early scientific accomplishments from written descriptions made by subsequent generations, but then on rare occasion we discover a surprising artifact in an archaeological dig.  A particularly jaw dropping example comes from the Maya.  Archaeologists decoded a 12th century pre-Columbian Mayan stone calendar and used it to predict the date if the total solar eclipse that passed through southern Mexico on July 11, 1991—a prediction off by a couple of days!

By making careful observations of the Moon and Sun, virtually every ancient civilization discovered that for a given solar eclipse, the Sun, Moon and Earth returns to the same relative positions in 6,585.3 days (18 years, 11 day, and 8 hours).  This is the Saros Cycle and we can use it to predict when and where the geometry of the North American Eclipse of August 21, 2017 will repeat. The path and duration of totality for the 2017 eclipse will occur again on September 2, 2035.  But because a Saros Cycle includes an additional 8 hours, this eclipse will pass across China, or a third of the way around the globe to our west.

In 1901, one of the most amazing scientific artifacts was discovered by sponge divers who were exploring an ancient shipwreck off the Greek Island of Antikythera.  Along with large marble sculptures, bronze statues, pottery, coins, and jewelry, these divers recovered an odd lump of badly corroded metal and wood.  The artifact was ignored for decades until CT imaging revealed something amazing—this unremarkable lump of bronze and wood was an ancient crank-driven analog computer, consisting of 37 metal gears, dials, and pointers.

This “computer” had been constructed around 150 BC.  Given the name, Antikythera, this intricate and complex gear mechanism tracked the date, accurately followed the motion of the Moon and Sun through the zodiacal constellations, displayed the current phase of the Moon, and used the Saros cycle to predicted lunar and solar eclipses. No one expected the ancient Greeks possessed the knowledge and skills needed to make a device like this—literally 1,200 years before these same calculators would appear in Europe.  Is the Antikythera mechanism an extremely lucky discovery of the only computer of its kind at the time, or are there many more examples of ancient technologies buried and long forgotten?  How much did our ancestors in Mesopotamia, Asia, the Americas, Africa, or Polynesia accomplish in astronomy that we know nothing about?

So did the dinosaurs explore space?  Did they do astronomy?  Did they create their own version of the Antikythera?  Of course they didn’t.  They couldn’t because they never developed the intelligence required.  Based on the ratios of their brain volume to physical size, most dinosaurs weren’t any smarter than possums.  Even the Velociraptor—genius of the Jurassic Park movie franchise—was not quite as clever as your cat.  Being around the planet a long time, even for hundreds of millions of years, doesn’t guarantee evolution will bestow a species with intelligence. After all, bacteria have been around for 4 billion years and there is no evidence they solved Fermat’s Last Theorem, or even cared.

It’s Homo sapiens that won the evolutionary jackpot, developing a highly intelligent and curious brain interested in asking and answering questions about the universe.  While we celebrate the 50th anniversary of the Apollo 11 lunar landing and marvel at the astonishing accomplishment of sending humans to the Moon and returning them safely to Earth, let’s take a moment to appreciate our unique and rare ability to question, explore, and invent—and hope we continue to use our unique brains wisely.

Editor's note: This article has been adapted from Linda's First Word that originally appeared in the Summer 2017 issue (vol. 46, no. 3) of Mercury magazine.