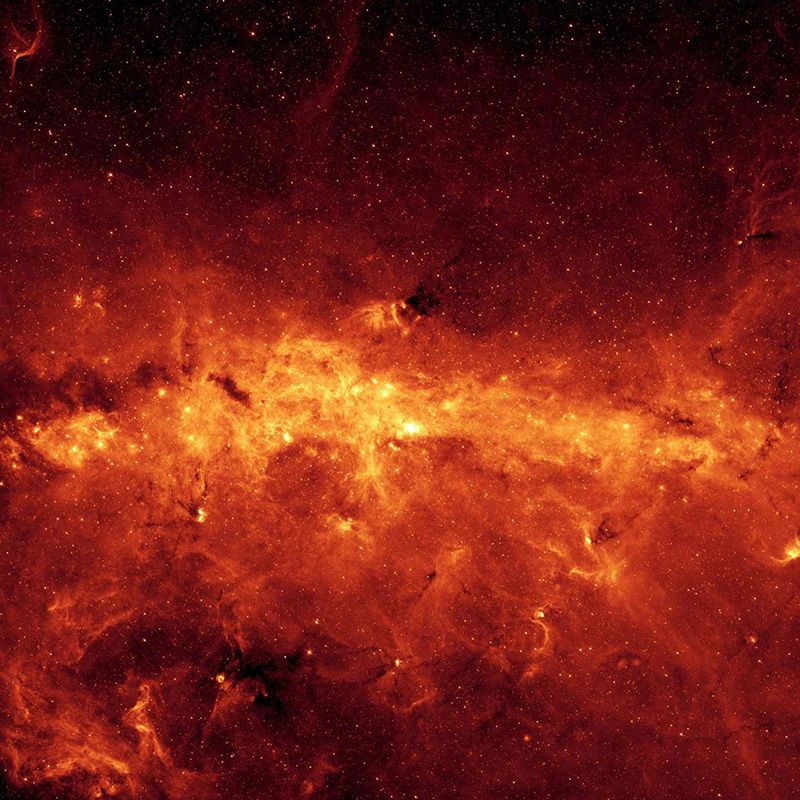 Image: Galaxies are chock-full of dust, including ours, as this infrared view of the center of our galaxy—by NASA's Spitzer space telescope—shows. [NASA]

"We're made of star-stuff."

In 1980, Carl Sagan made this statement on public television in his show Cosmos. This quote rippled through generations, inspiring future scientists and backyard observers for years to come. In fact, upon meeting new people, many recite this Sagan quote to me, and occasionally some folks begin rolling up their sleeves to show me a corresponding tattoo. But the particular star-stuff Sagan referred to is actually less than one measly percent of a galaxy’s composition. So, what is this super important star-stuff and why does it matter if there is so little of it in the Universe?

Sagan is actually referring to dust. No, not the dust that you so desperately need to wipe away from behind your computer screen (although that comes from human skin, and we humans are made of star-stuff … but that’s beside the point). I’m talking about cosmic dust; the dust that lives in space, existing in every corner, creating stars, planets, moons, and raining down on our planet every single second of the day. This dust is actually a lot more like soot, in both size and molecular makeup; it is structurally complex and has an organic (carbon-based) chemical composition. And, like the dust in the corners of your home, it used to be viewed as a major nuisance.

Dust grains are the perfect size to block incoming starlight. For centuries, astronomers would observe stars and galaxies using telescopes built to view the optical universe. At the optical wavelengths, which are wavelengths similar to what our human eyes can see, you will mostly see adult stars. If there is any dust in the way, even just a very small amount, that dust will absorb the visible light coming from the stars and leave you essentially blind to stars behind it. Even worse: new stars form in extremely dense, cold clouds of molecular gas where the gas can freeze onto dust particles throughout the cloud. So, if you wanted to study how stars form inside a stellar nursery using an optical telescope, you would essentially be observing the outsides of a big, dark, and opaque cloud floating in space. It wasn’t until the late 1960s that astronomers began pondering ways to see through that dust, exploring the idea that dust heated by visible starlight might convert that light into lower energy to infrared light.

In the 1990s, the Cosmic Background Explorer (COBE) was launched to explore the extragalactic background light at infrared and submillimeter wavelengths. Extragalactic background light is the accumulation of all of the radiation from stars and galaxies since the birth of the Universe. The best metaphor for this phenomenon is to imagine an orchestra: in an orchestra, there are many different instruments being played and they are made out of a variety of materials, materials which influence the sound of each instrument. Over the course of a symphony, different instruments are played at different times, sometimes even at the same time, and they are also playing different – or the same – notes. This is similar to galaxy evolution: stars are forming at different times, sometimes during ‘bursts’ where many stars form all at once; groups of stars may die at roughly the same time through violent supernovae; galaxies dance and merge, creating a mess of stars during the process and maybe even igniting an active galactic nucleus. All of these processes (and more) emit radiation at a variety of wavelengths – i.e. notes or frequencies in a symphony – and these processes happen at different times for different galaxies.

Now pretend you know nothing about instruments, but you have an idea what an instrument made of brass versus one with strings might sound like. You’re given a recording of a symphony and asked to determine roughly how many instruments are playing in each instrument class (e.g. strings, percussion, etc.) throughout the piece. This might be achievable to a sufficient level of accuracy for one musical piece, but what happens when you’re given a recording of two orchestras that were recorded at the same time playing two different symphonies? What about a hundred? What if the musical pieces all started and stopped at completely different times? At best, with some mathematical tools, you might be able to identify which notes are played the most and then try to find a combination of instruments playing certain classical pieces that might create this distribution of sound (if you’re interested in knowing what those mathematical tools are, look up Fourier transforms). This would take a lot of time, computation, and would never be completely accurate. Observing extragalactic background light is akin to listening to that one recording, and astronomers make intense efforts to understand what processes transpired during which times and locations in the Universe to create this background light at various wavelengths.

COBE’s measurement was groundbreaking. It revealed that infrared extragalactic background light is nearly as strong as the visible background light. Naturally, astronomers wanted to link this infrared background light to galaxies. However, upon doing so, astronomers discovered that only half of the infrared background light could be explained by all of the galaxies in the known Universe at that time (remember: the majority of those galaxies were discovered only by means of visible telescopes). Combined with similar observations made previously by the IRAS telescope in the 1980s, astronomers took these results as proof that there has to exist a significant number of galaxies that are too dusty to be detected at optical wavelengths. Several years later, infrared telescope technology advanced enough to birth the Submillimeter Common-User Bolometer Array, the Spitzer Space Telescope, and the Herschel Space Observatory, among many other instruments, and the dusty veil hiding the existence of millions of galaxies in our Universe was finally lifted.

These infrared bright galaxies have many names in astronomy. Depending on how they are detected, how near or far they are, and many other characteristics, you may hear them referred to as submillimeter galaxies (SMGs), (ultra)luminous infrared galaxies (LIRGs or ULIRGs), or dusty, star-forming galaxies (DSFGs). Here, we will refer to them as DSFGs as I believe this class of galaxy has really earned this name.

By tracing warm dust content through infrared light, we can also trace star formation activity. As new stars form deeply embedded within cold clouds of dust and gas, their bright UV and optical light warms the surrounding dusty envelope, which in turn reradiates at infrared wavelengths. The Milky Way is forming stars at a rate of about 3 times the mass of the Sun per year. DSFGs, however, are forming stars at a rate of 100-1000 times the mass of the Sun per year, sometimes even more – hence the ‘SF’ part of the acronym. On average, DSFGs are 10-100 times more massive than the Milky Way but can occupy a physical volume up to 99% smaller than that of our galaxy. So, DSFGs are extremely compact, extremely massive, and extremely dusty. Why are they so extreme?

The extreme existence of DSFGs is still exotic to many astronomers. Most cosmological simulations that seek to model the formation of our Universe cannot reconcile the sheer number of DSFGs we observe today, let alone explain how they form in the first place. What we do know thus far is that DSFGs are most populous in the early and intermediate Universe, and that they tend to contain large amounts of cold gas. This is important because the early Universe was primarily neutral (i.e. cold) Hydrogen and Helium, which meant that the first galaxies to form were likely giant, gravitationally bound spheres rich with gas ready to form new stars at a rapid pace. Where you find massive, gas rich stars forming at a rapid pace, you will also find powerful (and frequent) supernovae which enrich their surroundings with heavier elements and, you guessed it, dust!

However, this fast-paced lifestyle comes at a price. Researchers calculate that these rates of star formation are unsustainable in the long term. DSFGs are projected to deplete their cold gas reservoirs so rapidly that some might not ever reach the ‘spiral disk’ phase of galaxy evolution, and instead turn into what we astronomers affectionately refer to as massive ‘red-and-dead’ elliptical galaxies, galaxies that have little to no gas and are no longer forming any new stars. Some astronomers believe DSFGs undergo several major mergers with each other early on, and that’s how some DSFGs seem to have such massive amounts of gas and dust and non-disk-like shapes. However, the evolution of DSFG morphology is still a topic of heated debate, likely containing some complex combination of several theories, so I leave this part to the whims of your imagination.

My current work seeks to better understand dust and gas distributions within distant DSFGs, and what those distributions can say about the evolutionary state of the Universe at that time. While we have observed many DSFGs at far-infrared and cooler wavelengths, we still need observations in other parts of the spectrum to fully understand their properties. Additionally, there are many observational hurdles to overcome. For example, many DSFGs are seen as they were in the earlier Universe, when galaxies were more populous and galaxy mergers more frequent. Depending on the sensitivity of a given telescope, two galaxies merging while flinging around cold gas and dust may look like one big blob-like galaxy, two distinct galaxies, or maybe even just one of the galaxies is bright at that given wavelength but the other one isn’t due to different evolutionary stages or chemical compositions. These observational effects can greatly limit our understanding of DSFG populations. Thus, many astronomers, including myself, are exploring ways to use multi-wavelength observations to overcome these hurdles so we can better understand the strange existence and evolution of DSFGs.