GRBs Have "Time-Reversed" Pulses of Light 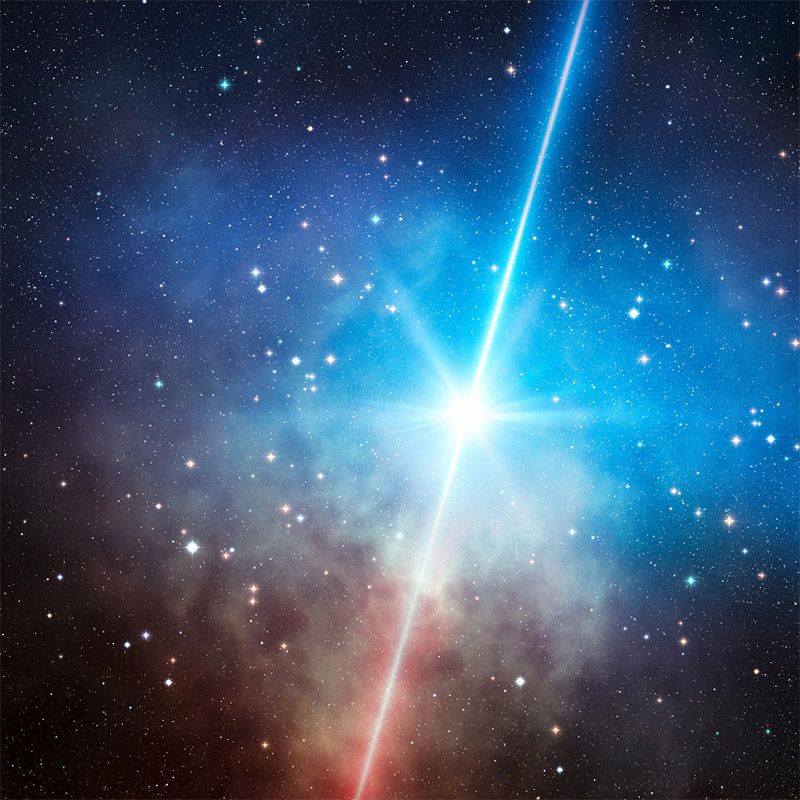 This article was originally published in the Fall 2018 (vol. 47, no. 4) issue of Mercury magazine, an ASP members-only quarterly publication.

Do geese see God? It’s the kind of question astrophysicist Jon Hakkila has been asking lately. That and, “Was it a car or a cat I saw?”

No, Hakkila isn’t probing the metaphysical, nor are his eyes playing tricks on him. Rather, he and his colleagues based at the College of Charleston in South Carolina have discovered a rare property in the light signals of gamma ray bursts (GRBs): the light can look the same forward as it does backwards, as if it is some kind of grand cosmic palindrome.

(OK, I’ll pause here to allow you to read the lettering of those questions backwards.)

Much like a complex sentence, there’s little chance that a chaotic explosion of light would accidentally be a palindrome. Sure, you can easily do it with simple words: mom, dad, radar, and so on. But remember, GRBs are among the most powerful explosions known.

These are signaling the birth of a black hole, either from the runaway collapse of a massive star or the merger of two neutron stars.

What Hakkila’s team essentially observed, in day-to-day terminology, is a collection of gamma ray bursts that went into a house, turned the room lights on one by one, and then turned them back off in reverse order. That’s different from a bell-shaped brightness curve in which the light grows more intense, peaks, and then starts to dim. All explosions do that. And it’s not the mirroring we see with gravitational lensing, in which the same image is seen reflected in different parts of the sky.

Rather, Hakkila’s group observed what physicists call “time-reversible wavelike residual structures.” If you think of each photon as a day of the week, with each one rightfully unique in its signature, then the brightest gamma-ray bursts appear like Sunday-MondayTuesday-Wednesday-Tuesday-Monday-Sunday instead of Sunday through Saturday.

The phenomenon was most apparent in six bright GRBs first observed more than a decade ago with NASA’s Compton Gamma Ray Observatory, which Hakkila reanalyzed. (How’s that for a blast from the past; Hakkila explained to me that Compton’s BATSE instrument is in some ways better than two stalwarts working today, NASA’s Swift and Fermi, because it collected more and worked in a less noisy part of the spectrum, yielding a high signal-to-noise ratio.)

So, what’s causing the mind-bending, time-bending phenomenon? Rise to vote, sir. Sorry, another palindrome. But in short, nearly three months after Hakkila’s team published the observation in the August 2018 issue of the Astrophysical Journal, they are no closer to an answer.

Whatever the cause, Hakkila said, it must point to the unique nature of the gamma-ray burst and the creation of a black hole. Black holes are capable of accelerating particles to nearly the speed of light, producing strong gravitational lenses and immense blast waves as they go, and any of these characteristics might make GRBs capable of altering pulse light curves in strange and exotic ways.

Robert Preece, a GRB expert at Department of Space Science at the University of Alabama in Huntsville, who was not part of the research team, said Hakkila’s analysis seems solid and the observation statistically sound. He said he had two of his own “preferred models” to explain the observation. Both imply that the GRB is carrying some sort of mirroring effect with it.

Preece said that “tidal tails” that wrap several times over the jet emission region might generate repeating structures or that “magnetic island domains” compressed by the outflow travel as “entrained blobs” to create the observed illusion of reversed time signatures.

Astrophysicists will need some time to sort this out. In the meantime, I wonder if we should rename gamma-ray bursts as gamma-ray gusts. That’s GRG.