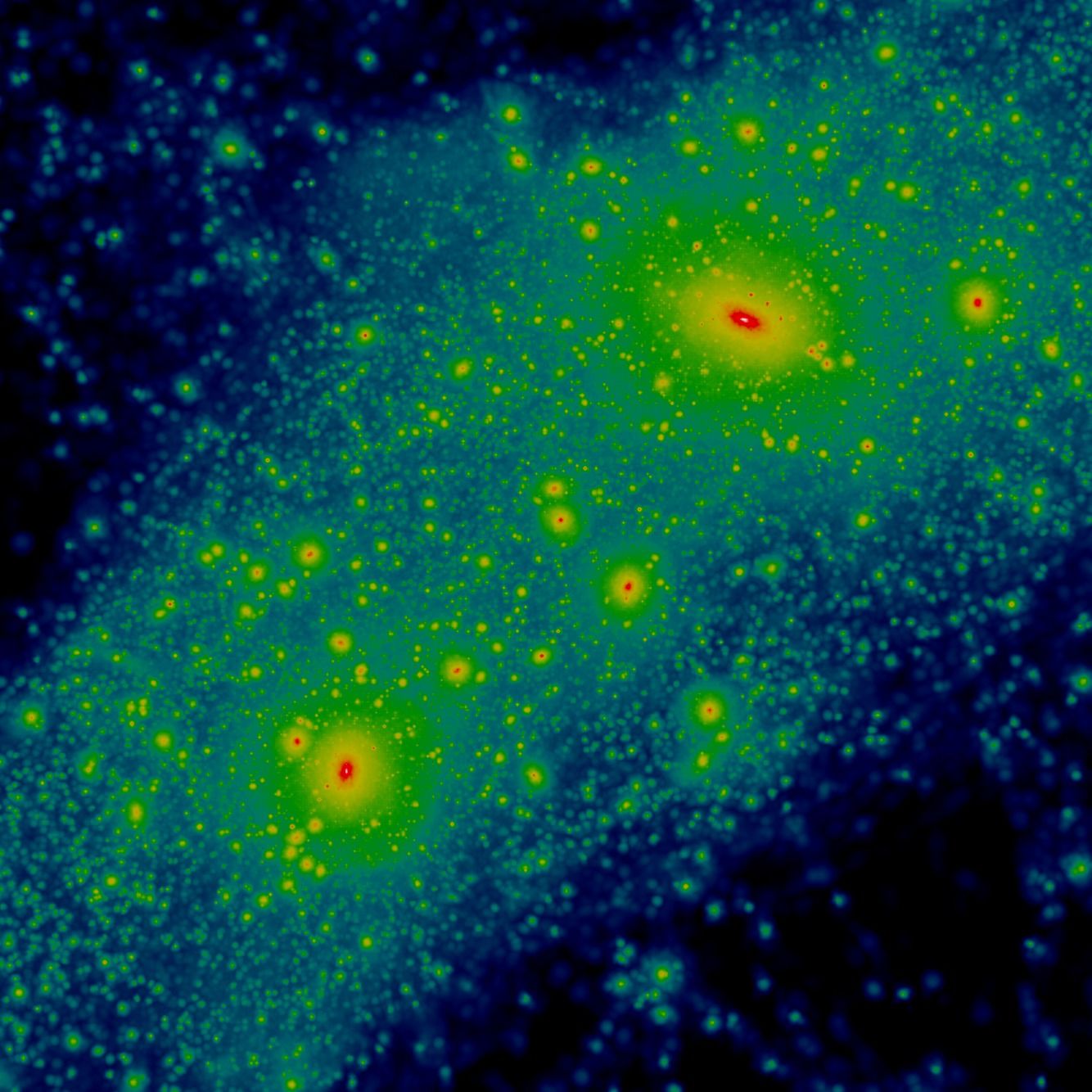 Astrophysics may be the only field of study that deals simultaneously with the largest and smallest scales known to humankind. Astronomers have answered some of the biggest questions using relatively tiny solutions—such as detecting two black holes colliding billions of years ago through a detector’s physical change that’s smaller than a proton.

These newly detected waves aren’t the only big question/tiny solution occurrence in recent astronomy history. One of the most intriguing puzzles of the last decade focuses on the interface of cosmology, particle physics and galaxy evolution. If you’ve tuned into any popular science news, you’ll know the question daunting astro- and particle physicists alike: what is dark matter and how the heck does it work?

What we do know: Dark matter makes up about 25 percent of the universe, with dark energy being the most abundant at 70 percent, and visible matter (everything we can see) coming in last at just five percent. There are some hearty theories about what dark matter could be and how it affects visible matter and it just so happens that this is where astronomers working on galaxy evolution (like me!) can assist in finding an answer to one of the most perplexing puzzles of our time.

You see, we know that the preponderance of galaxies are “housed” inside a dark matter halo (a surrounding sphere of dark matter), but does every house have a galaxy? Through research in how these homes (dark matter halos) and their inhabitants (galaxies) interact, in part, the theory of Cold Dark Matter (CDM) has emerged, with some specific parameters on the model to create the well known ΛCDM model of dark matter. ΛCDM is excellent at explaining large scale structures of the Universe, like groups of galaxies, but it’s not so great at explaining the small details like which “houses” ultra-faint dwarf galaxies live in.

This issue with ΛCDM not excelling in describing the smallest scales of structure in the universe and galaxies is almost like the older sister to my very first astrophysics graduate research project—asking how long it might take for ultra-faint dwarf galaxies to stop forming new stars. (You can read my previous article on this topic in the Mercury Winter 2018 issue.)

Here, the downfalls of the ΛCDM model manifest in count discrepancies of ultra-faint dwarf galaxies. Simulations of galaxies in the Universe (cosmological simulations) predict many more tiny dark matter halos than the number of tiny galaxies predicted through observations. In simulations of Milky Way-like galaxies and the surrounding galaxies, there are commonly about 1,000 of the smallest dark matter halos, yet we only see about 50 of the smallest galaxies nearby. What physics are we not understanding that’s causing such a big discrepancy?

There should be an equal number of dark matter halos to galaxies—but we’re seeing an awful lot of empty dark matter homes! Thus, this discrepancy is aptly named the Missing Satellites Problem, since we’re focusing in on small galaxies surrounding the Milky Way. While we are certain there’s undiscovered tiny galaxies of the ultra-faint variety nearby, it seems highly unlikely that there are around 1,000 undiscovered nearby.

Through detailed investigations on how galaxies and their dark matter homes fit together, there has been some headway made in find the solution to our dilemma. One of the greatest positives to ΛCDM is how well this model predicts large-scale structures in the Universe. As mentioned earlier, it’s on the tiniest scales where our problems arise. One potential solution that rectifies this small scale issue—as well as the Missing Satellite issue—is that it could just be harder to form galaxies in increasingly smaller dark matter halos. Meaning, there really are empty dark matter homes roaming around the universe! So, the satellites are not missing; it’s the overabundance of dark matter halos that are just empty.