Dark Matter... Or Something Else? 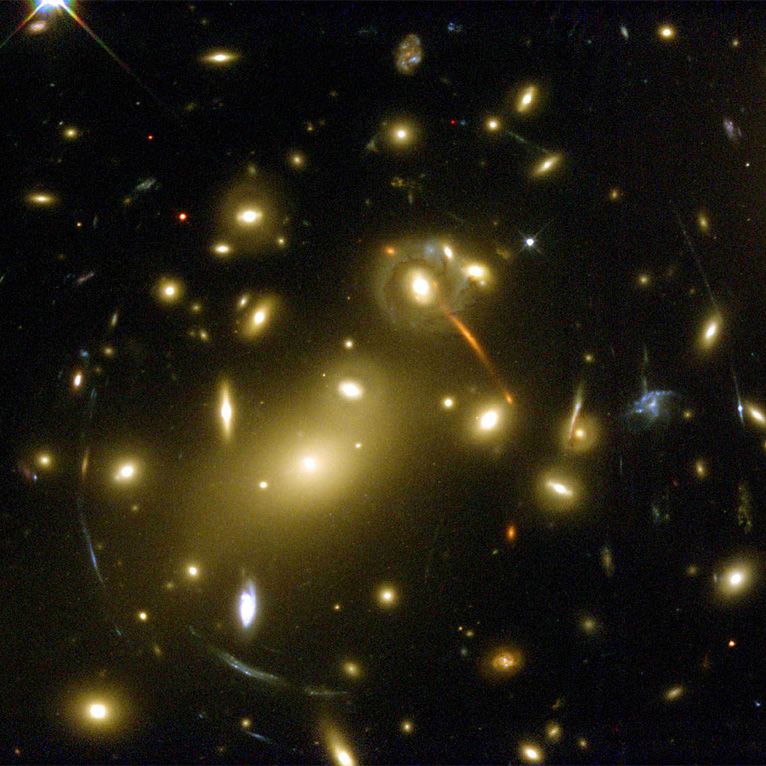 Lensed galaxies as seen by the Hubble Space Telescope reveals the presence of dark matter in galactic clusters. [NASA/ESA]

In the current cosmological model, gravity is described by general relativity, but the Universe itself is only five percent ordinary, or baryonic, matter. The other ninety five percent of the Universe is made of dark matter and dark energy, both of which are so fundamentally different from ordinary matter and energy that they qualify as “mysterious.” Dark matter, which was first proposed in the 1930s, constitutes one quarter of the universe.

So, what is dark matter? The mundane candidates are brown and red dwarfs with low luminosity. However, the observational evidence suggests that these contribute only a negligible fraction of dark matter to the Universe. The primary candidates for dark matter are particles that interact only weakly with ordinary matter—so-called weakly-interacting massive particles, or WIMPs. WIMPs interact gravitationally but are unaffected by electromagnetic and nuclear forces. Whatever they are, WIMPs are very different from ordinary matter.

Because they interact so weakly with matter, searching for WIMPs is a complicated affair. Most experiments rely on the detection of annihilation radiation from dark matter particles interacting with normal matter. Decades of such experiments have failed to detect any dark matter particles. So, the only “evidence” for dark matter is gravitational—the very reason it was postulated in the first place!

Relativistic astrophysicist Gustavo Romero reminds us that dark matter is not a scientific fact, but rather a hypothesis. He argues that the dark matter bears an uncanny resemblance to abandoned hypotheses like “phlogiston” and “aether” in that “we are explaining something unknown by something that is even more unknown.” He also points out that any newly postulated physical law or phenomenon should be overwhelmingly supported by experimental evidence, which is clearly not the case for dark matter. Employing Ockham’s Razor, Romero suggests that we should be looking to explain the phenomena attributed to dark matter only by exploring modified gravity, and there are already several such proposals.

Modified Newtonian dynamics (MOND) was first proposed by Israeli physicist Mordehai Milgrom. MOND theory postulates that Newton’s second law, F=ma, does not hold at the low accelerations, approximately 10-10 m/s2, observed in the outer regions of galaxies. Milgrom proposed that F=mμa where μ is a function of the ratio of a particle’s acceleration and a new constant ao = 1.2 x 10-10 m/s2; when the acceleration is much greater than ao, μ is equal to 1 but approaches a/ao when accelerations are much less than ao. MOND predicts that an asymptotic orbital velocity, v4=MGao where M is the mass of the galaxy and G is Newton’s gravitational constant. This velocity is consistent with the Tully-Fisher luminosity-velocity relationship for spiral galaxies. While MOND can reproduce flat rotation curves in galaxies without dark matter, it does not work for galaxy clusters.

Modified Newtonian gravity (or MONG) proposes a similar type of modification to Newton’s universal law of gravity. Specifically, MOND proposes F=(GM/r2)f. Here f=r/ro with ro being a fundamental scale of distance on the order of several kiloparsecs. If r is much less than ro then f is equal to 1 and we get back to Newton’s original law. This law produces a velocity in the outskirts of a galaxy given by v2=GM/ro, which is inconsistent with the Tully-Fisher (TF) relationship. MOND can also reproduce the flat rotation curves of individual galaxies but its failure to reproduce the TF relationship and the rotation curves of galactic clusters makes it difficult to accept as a serious contender. In a recent paper, Luis Acedo re-examines MOND and proposes a more complex modification of Newtonian gravity in order to reconcile MOND with the TF relationship and he has some success.

There are also relativistic MOND theories. Such theories are important because MOND without relativity cannot explain gravitational lensing by extragalactic systems. One such version is the tensor-vector-scalar (TeVeS) theory developed in 2004 by Jacob Bekenstein. TeVeS explains both galaxy rotation curves and extragalactic cluster dynamics. Romero suggests the TeVeS and similar theories can be tested in the regime where they would differ from general relativity: in regions where gravity is strong such as black holes and neutron stars.