Why Do Galaxies in Large Clusters Age Prematurely? 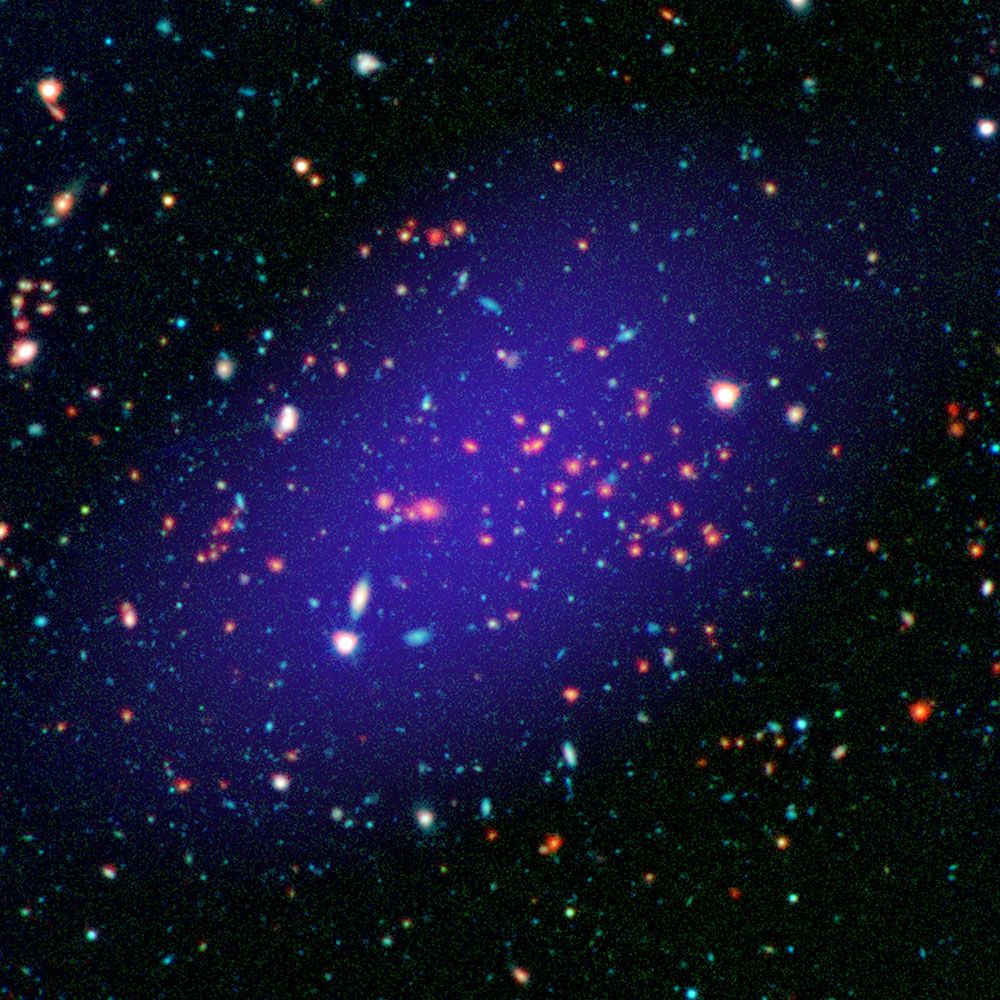 Let’s visualize together for a moment. We live on Earth—the third planet from the Sun. The Sun is a pretty average star, not very large, and living its best middle-aged life. Though it’s special to us, our solar system isn’t so unique either; there are about 300 billion other stars in the Milky Way galaxy, most of which also have planets.

If we zoom out a little more, we can see that the Milky Way is dancing with roughly 50 other galaxies … which also have hundreds of billions of stars with planets. This little collection of galaxies is known as the Local Group, and even that’s not very exceptional. That’s because some galaxies are in huge groups with hundreds to thousands of other galaxies, all gravitationally bound to one another. These structures are called galaxy clusters, and they are the most massive objects in the Universe. Let me repeat that: the MOST massive.

If we were in one of these clusters, our night sky would look very different. For one thing, it would be brighter, as our neighborhood would be quite crowded. The stars in our own galaxy would appear red or yellow instead of blue, as blue colors signify youth in a galaxy, emitting from areas where new stars are born—but our galaxy would likely never birth a new star again. In fact, almost every galaxy in our neighborhood would look like a dim, orange blob of light because nearly all galaxies in clusters are no longer forming stars—a conundrum that really bugs astronomers.

How do we figure out what killed galaxies in clusters if we can only take pictures of their carcasses?

Let me paint a picture for you: if we think of galaxies as our grandparents, galaxies in cluster environments would be the ones you know lived a hard life just by looking at them. They’re always tired; maybe they had too many kids all at once, or they just partied a little too hard in their youth, and now they live in a home with other senior citizens who went through something similar. However, galaxies living in small groups or isolation, like our Milky Way, would be those grandparents that still go salsa dancing once a week and can do more push-ups than you can. Really, they will probably outlive us all. These two types of galaxies were born at the exact same time. But the less crowded ones are still gently forming stars and hanging onto that blue-colored youth, essentially the equivalent of enjoying a really slow retirement.

So, what exactly happened to cluster galaxies that caused them to age so rapidly? To get to the bottom of this, astronomers have created simulations to understand the possible births and lives of cluster galaxies based on data from hundreds of real senior galaxy clusters nearby. This is essentially the equivalent of taking thousands of photos of senior citizens and using physics to model what these citizens might have looked like when they were babies.

As you can imagine, a lot of assumptions and theories go into these models, so we need pictures of middle-aged, teenage, and baby clusters to really test our theories. Thankfully, in the last decade, we’ve started filling in our evolutionary photo album with more middle-aged and teenage pictures ... but we’re seriously lacking baby photos.

Galaxy cluster “babies,” also known as protoclusters, can be difficult to identify because they don’t have the same qualities as their descendants. The galaxies inside a protocluster are likely blue, instead of red, as they are still growing and forming stars. They are also more spread out across the sky as they are still traveling across vast distances to eventually fall into the final cluster formation. And they are hard to see because they live in earlier times in the Universe and are therefore farther away from us.

Due to these difficulties, we must seize the opportunity to study a protocluster deeply whenever we do find one. In the past two years, international teams working with the Subaru Telescope and archival data from the Herschel Space Observatory have identified some very big, very distant protocluster candidates. One of those protoclusters is already proving important to filling in our evolutionary photo album.

The Distant Red Core (DRC) is a massive galaxy protocluster caught in the act of formation in the early Universe. Our current measurements show that every galaxy in this cluster is simultaneously forming stars at extreme rates—I’m talking thousands of times faster than the Milky Way galaxy. These galaxies are also violently merging with their neighboring galaxies, a mechanism that’s believed to trigger extreme bursts of star formation as huge reservoirs of gas collide. According to detailed simulations, these processes are believed to accelerate galaxy evolution, bringing the senior lifestyle to the cluster galaxies at a much more rapid pace than their isolated peers.

Soon, we will determine exactly how many galaxies are expected to collapse into this protocluster—is it tens or is it hundreds? Then, we will predict what the cluster might look like today after evolving for 11 billion years.

Over the next decade, new powerful telescopes will help us discover and characterize more infant galaxy clusters so we can get a more complete story. Even more enticing, since galaxy clusters are likely some of the first objects to form in the Universe, we will be able to use these protocluster studies to map out the fingerprint leftover from the Universe’s own birth—the Big Bang.