How Gaia Reaches Beyond Our Galaxy 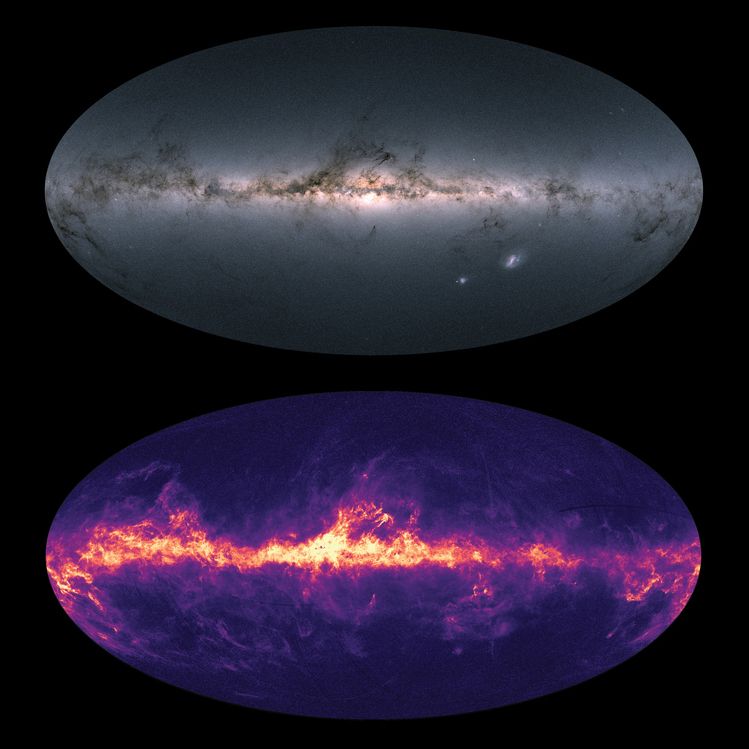 Image: Gaia’s all-sky view of the Milky Way and neighboring galaxies. The maps show the total brightness and color of stars (top) and the interstellar dust that fills the Galaxy (bottom). [ESA/Gaia/DPAC]

In some ways, astronomers are in the business of cosmic sleuthing—we only see frozen images of what the universe looks like now and it takes some clever detective work to figure out how the universe evolved into its current state.

Using various techniques, we can accurately figure out how far away celestial objects are and how fast they are traveling towards or away from us. But what about their side-to-side motions? What about their total 3-dimensional position and velocity? What’s the big picture of where celestial objects are going and where they came from? This is where the European Space Agency’s Gaia Telescope comes in to help us solve these puzzles.

Gaia has a truly monumental mission—to make a 3-dimensional map of one billion stars in our galaxy. This will be the most precise 3-D map of the Milky Way ever assembled, containing an unprecedented one percent of the galaxy’s 100 billion stars. Gaia doesn’t just focus on stars, however. This amazing mission has observed tens of thousands of asteroids in our Solar System, the motions of stars in other galaxies and up to half a million distant quasars.

In April (2018), Gaia released its second dataset from 22 months of observations. This remarkable set includes the proper motions of 1.3 billion stars in and out of our galaxy. Proper motions are the tiny movements of stars against the ‘fixed’ background of stars, usually measured in milliarcseconds per year and not to be confused with parallax. Parallax is the apparent motion of an object against a fixed background when it’s viewed from two different locations, while proper motions are the actual side-to-side movements of an object against that fixed background.

Since proper motions are side-to-side movements, astronomers can calculate a star’s total 3-dimensional position and velocity. This 6-dimensional phase space information (3 positional dimensions and 3 velocity dimensions) makes it possible for astronomers to trace the orbits of these stars, helping us work out where they came from and where they’re going!

Putting all these clues together, astronomers can now look at where entire galaxies have come from since having proper motions for a set of stars from the same galaxy allows us to derive the motion of that galaxy! In the curious case of the ultra-tiny, ultra-faint dwarf galaxies, which we only see in our Local Group, these proper motions dramatically increase our knowledge of these mysterious neighbors.

Recent works by Josh Simon, Tobias K. Fritz et al., and others sheds the first light onto the mystery of the orbital pasts and futures of some of these tiny neighboring galaxies. A few exciting results are that contrary to previous belief, most of the ultra-faint dwarfs have not lost many of their stars to tidal (gravitational) forces of the Milky Way and that a group of the ultra-faint dwarf galaxies all came into the Milky Way’s gravitational domain together.