Mercury Will Transit the Sun on November 11 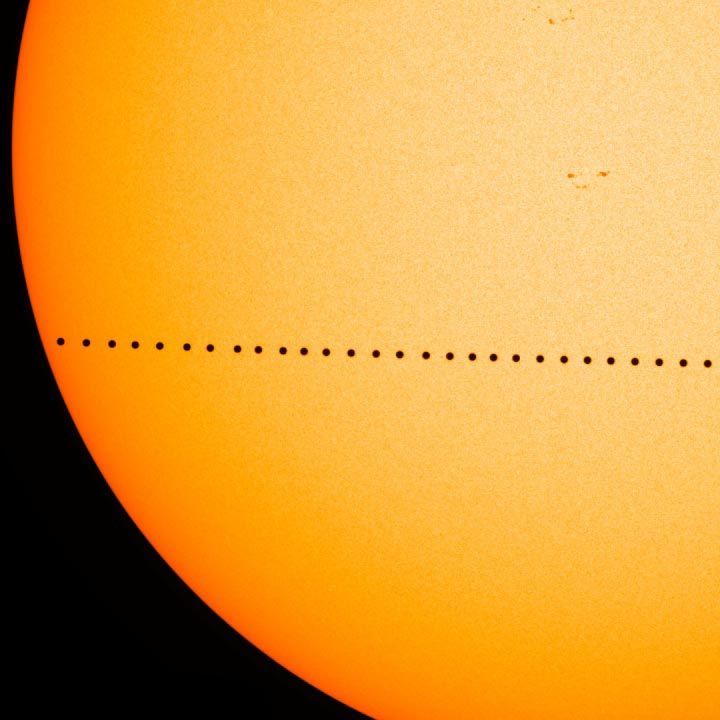 Mercury’s transit can be used to measure the distance between the Earth and Sun. [NASA]

This article was originally published in the Fall 2018 (vol. 47, no. 4) issue of Mercury magazine, an ASP members-only quarterly publication.

On November 11, 2019, all or part of the transit of Mercury will be visible throughout a good portion of the United States. If the weather holds, the entire event will be visible in my home state of Kentucky. As I thought about incorporating this event into my Fall 2019 physics courses, I wondered about the history of transits and the kinds of scientific research that might be achieved by observing Mercury’s transit.

Using his newly established laws of planetary motion in the early 17th Century, Johannes Kepler predicted that both Mercury and Venus would periodically transit the Sun. A telescope is required to observe transits of Mercury and Kepler himself never witnessed such an event. French astronomer, Pierre Gassendi observed (and published) the first transit event: that of Mercury in 1631. Mercury transits occur roughly thirteen times per century, while Venus has only transited the Sun eight times since the invention of the telescope.

Scottish mathematician James Gregory made the initial proposal of using transits to measure the solar parallax in 1663, and English astronomer Edmund Halley devised a practical method to do so in 1691. Halley knew that Venus, with its much larger apparent size, would be more useful for this purpose, but died 19 years before the 1761 transit of Venus. During that event, astronomers applied his method and determined the astronomical unit to be 95 million miles, not far off the modern value of 93 million miles. Today, students can use the transit of Mercury to determine the astronomical unit with relatively inexpensive equipment.

Observations of the 1761 transit of Venus saw the first reports of the mysterious “black drop effect,” in which Venus assumes a teardrop shape as it makes contact with the limb of the Sun. Mercury also exhibits a black drop during transits, but to a lesser extent. Historically, the black drop effect limited the precision of solar parallax measurements. Explanations for what causes it include turbulence in Earth’s atmosphere, optical effects of the telescope, and the atmosphere of Venus. Notably, the effect was observed in space-based observations in 2004 from NASA’s Transition Region and Coronal Explorer (TRACE), so atmospheric blurring could be eliminated as a cause. It appears the black drop effect likely results from a combination of the point-spread function of the telescope, the solar limb-darkening effect, and halos that form around both the Sun and Venus. Observations of the 2019 transit of Mercury will likely include further studies of this interesting phenomenon.

Transits also provide an opportunity to study Mercury’s exosphere (the uppermost region of its atmosphere that fades into the vacuum of space). Mercury’s exosphere is usually observed in emission with specialized instruments, but transits provide a rare opportunity to study it in absorption. Observations of the sodium doublet line in absorption can provide information about the distribution of material in the exosphere as a function of location (polar versus equator) and time (dusk vs. dawn). The 2019 transit will provide researchers the opportunity to study exospheric sodium during the opposite season as the 2016 transit.

Not able to observe the November 2019 transit of Mercury? You can still capitalize on the excitement of the event in your curriculum. Project CLEA has an online classroom activity on the transits of Mercury and Venus. The Jet Propulsion Laboratory has two related activities: the “Pi in the Sky” site has a short activity entitled “Sun Screen” that examines the dimming effect of a transit of Mercury or Venus and “Exploring Exoplanets with Kepler” explores exoplanet transits around other stars.