X-ray Factor: Is Alpha Centauri a Winner for Life? 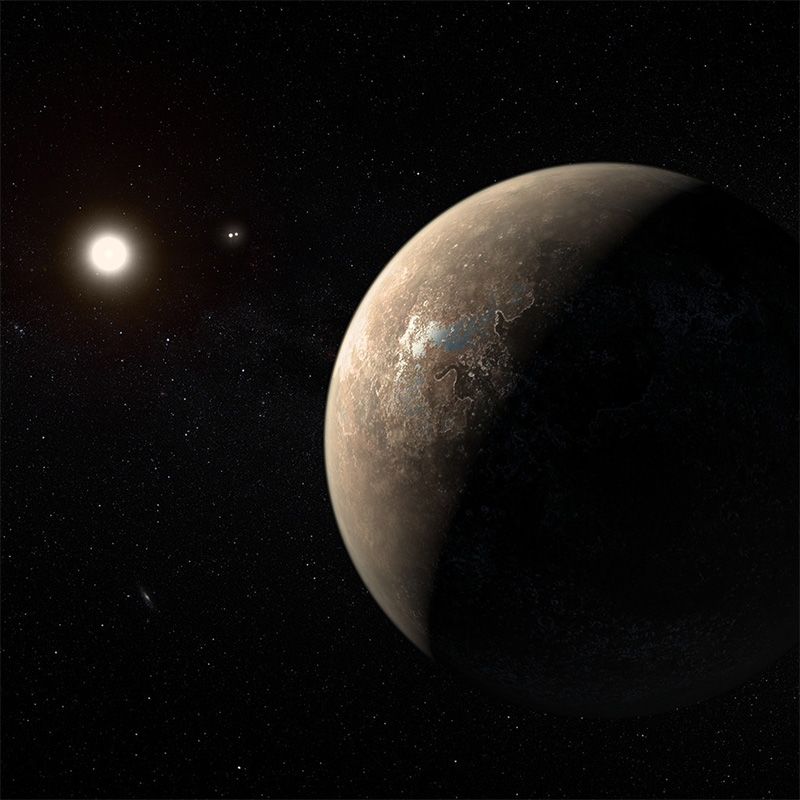 Artist's impression of Proxima b, an exoplanet being doused in X-rays. [ESO/M. Kornmesser]

The search for habitable planets beyond our Solar System is among the hottest topics in astronomy today. And in their search for new Earths, astronomers consistently turn to the most powerful optical and infrared telescopes: the twin telescopes at the W. M. Keck Observatory Keck and Hubble Space Telescope come to mind, along with the orbiting Kepler space telescope that was a dedicated planet-finder.

Tom Ayres of the Center for Astrophysics and Space Astronomy at the University of Colorado Boulder has taken a different approach in determining the habitability of planets at Alpha Centauri. Instead of looking for signs of the comforts of life—water, suitable temperature range, etc.—he looked for the telltale signals of death: X-rays.

Ayres combed through more than 10 years of X-ray data from the three-star Alpha Centauri system compiled by NASA’s Chandra X-ray Observatory. With three stars, you’d think the place would be bathed in sterilizing X-rays. But that’s not necessarily the case. Ayres determined that the two larger stars, Alpha Centauri A and B, emit more or less the same amount of X-rays as our Sun. So the X-ray flux there doesn’t rule out life. But the smallest star in the system, Proxima Centauri, a red dwarf, is rather active with X-ray flaring.

So, it seems, the chances of life developing in the newly discovered Earth-sized rocky planet there is nil. Ayres presented these results at the summer meeting of the American Astronomical Society in Denver on June 6, 2018.

Alpha Centauri is, by far, the closest star system to Earth, a mere 4.3 light-years away. The closest star among the trio is Proxima Centauri, a red dwarf only about 0.1 times (10 percent) the mass of our Sun. When astronomers confirmed the existence of a rocky planet in the so-called habitable zone of Proxima Centauri—a planet named Proxima b, with about 1.3 times the mass of Earth—folks were ready to hop in a spaceship to visit.

You should resist that temptation, however. Proxima b is bombarded with a dose of solar X-rays 500 to 50,000 times greater than what we receive on Earth. And that’s the problem with red dwarfs.

“For habitability, it’s not so much that Proxima is an active star; in fact, it’s less so than many other red dwarfs,” Ayres tells Mercury. “It’s rather that the habitable zone around the star is so close to the star because it is dim and cool. That proximity, so to speak, amplifies the effect of the radiation environment.”

Around Proxima Centauri, the habitable zone would be only a tenth the Earth-Sun distance; and the radiation levels would be 100 times higher than if the planet were at the Earth-Sun distance because the radiation intensity scales as the inverse of the distance squared. Alpha Centauri A and B are like our Sun’s sisters. Indeed, our Sun and Alpha Centauri A are about the same size and age. The latter is about 1.1 times (110 percent) the mass and 1.5 times the luminosity of the Sun. Alpha Centauri B is about 0.9 times (90 percent) the mass and half the luminosity.

Ayres found that Alpha Centauri A emits fewer X-rays than our Sun, and life there in the habitable zone would be safer than life here, in that regard. Alpha Centauri B has about 5 times the X-rays, worrisome but manageable. Ayres said that any planet there would need an atmosphere and ozone layer thicker than Earth’s to block the accompanying UV radiation. A magnetosphere to deflect harmful, charged solar particles would be crucial, too.

“For a life-hosting planet around Alpha Centauri B, I would pick a water world, somewhat heavier than Earth so it’s higher gravity would hold onto the atmosphere more tightly,” Ayers says. “The planet would probably have to be at the outer edge of the habitable zone, so its thick atmosphere would not suffer a run-away greenhouse effect [as on Venus], a tricky balancing act, indeed, but certainly within the realm of reason.”

But here’s the rub. While Alpha Centauri A and B are safe, we haven’t found any habitable planets near these stars, yet. We’re looking, that’s for sure.

Now, you may find it odd that a little red dwarf could emit more life-thwarting X-rays than bigger, brighter main sequence stars do not. This is for reasons not completely understood, explains Kenji Hamaguchi, an X-ray astronomer based at NASA Goddard Space Flight Center.

Red dwarfs tend to be more magnetically active than their larger cousins. Their relative coolness affects the thickness of the subsurface convective layer in which magnetic fields are generated, resulting in more X-ray flashes. Worse, unlike larger stars, red dwarfs can maintain their magnetic activity for billions of years, preventing protective planetary atmospheres to form, Hamaguchi adds.

Oh well. But two out of three stars ain’t bad.