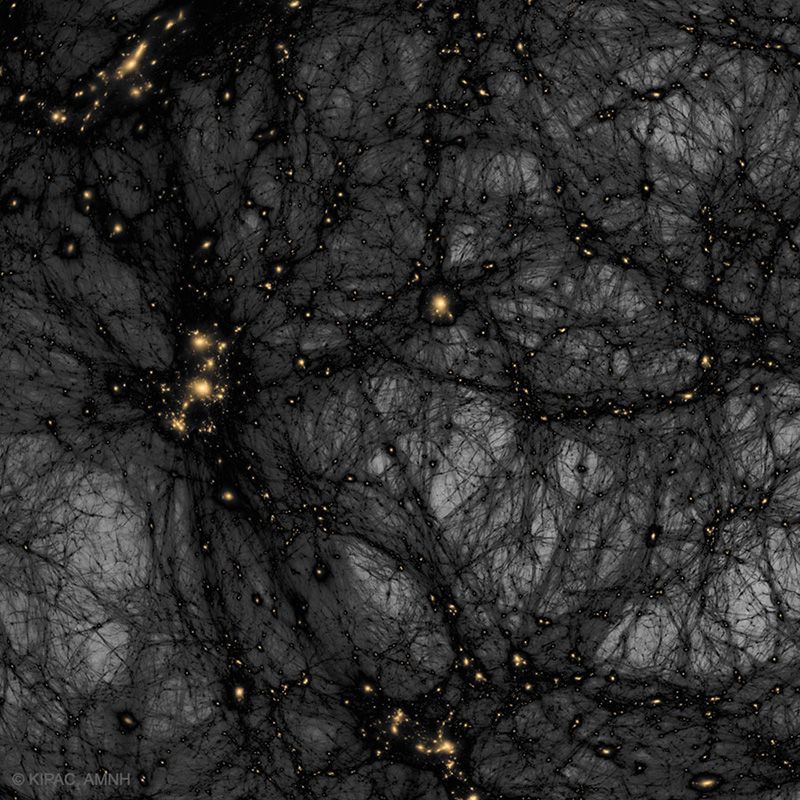 Detect gravitational waves? Check. Image a black hole? Check. Capture dark matter? Why not? Astronomers have accomplished some extraordinary feats in the past few years and, perhaps, the elusive nature of dark matter is now within reach.

Dark matter remains one of the most enduring mysteries of astronomy. Observations of galaxies imply that there’s something more out there than meets the eye. That structure we see—swirling galaxies and colossal clusters of star stuff—requires gravity to pull the matter together, but if you add up all the matter we can see, it falls far short of what is needed to exert such a gravitational force.

Astronomers estimate that a whopping 85 percent of matter is in a form that doesn’t interact readily with what we can see—it doesn’t heat up to emit electromagnetic radiation, for example. Thus, the stuff remains “dark” to us; it’s undetectable to modern instrumentation.

So, what is it? There are a few theories. One is that dark matter isn’t anything at all. Some theorists have suggested that general relativity, the theory of gravity, could be wrong and that no dark matter explanation is needed. These “Einstein was wrong” concepts often don’t stand up to scrutiny, however.

Another major theory is that dark matter comprises undiscovered particles. Why should we assume that we’ve discovered all known matter? After all, we didn’t discover antimatter until 1955 and neutrinos until 1965. The Big Bang theory of nucleosynthesis allows for the creation of baryonic and nonbaryonic matter, the latter of which did not contribute to the formation of the elements and could very well be dark.

The leading dark matter candidates are the theorized weakly interacting massive particles, or WIMPs. These would be elementary particles not part of the standard model of particle physics, unlike those quarks and leptons you may have heard about. The key word here is “massive.” Neutrinos are abundant elementary particles, but they are too light to contribute much to the mass budget of the universe.

Searching for WIMPs isn’t for wimps. Like neutrinos, billions of dark matter particles should pass through us every second. More accurately, the Earth plows through dark matter reservoirs. Because dark matter rarely interacts with ordinary matter, scientists are placing detectors deep inside the Earth.

The gist is that, below ground, few other errant particles would pass through the detector, but WIMPs, in passing through so easily, might by chance interact with a detector and deposit a bit of energy.

The Lawrence Berkeley National Lab is leading a project called LUX-Zeplin, with more than 30 collaborating institutions. The detector, with a tank of 10 tons of liquified xenon, will be about 5,000 feet below ground in the Sanford Underground Research Facility (SURF) in South Dakota, part of what used to be a goldmine.

The detector will be 100 times more sensitive than its predecessor, called LUX, which operated in the same underground space. Should a WIMP interact with the xenon, it would emit a telltale flash of light. As of October 2019, the detector is in place and the tank will be filled with xenon by Spring 2020. Scientists expect to start collecting data soon after.

Another contender for dark matter is a theorized elementary particle called an axion. As with antimatter, scientists may be able to generate axions in a laboratory setting. Things get funky-sounding here, so hold on: The gist is that ordinary light photons amplified in a cavity under the presence of a very strong magnetic field can convert themselves to some miniscule degree into axions. These axions would then pass through a steel wall otherwise blocking light and, on the other side, the axions would convert back into light.

In October, the international ALPS II collaboration based at the German research center DESY in Hamburg, installed the first of 24 superconducting magnets, marking the start of an experiment that will be 1,000 times more sensitive than ALPS I. Scientists hope to start collecting data in early 2021.

Note that LIGO I set the stage for gravitational wave detection, but the increased sensitivity of LIGO II (called “Advanced LIGO”) nabbed the prize. Could it be that the moment is finally ripe to detect dark matter? We may not be in the dark for very much longer.

Image: A simulated view demonstrating how pervasive filaments of dark matter are expected to be throughout the universe. [Tom Abel & Ralf Kaehler (KIPAC, SLAC), AMNH]