By the Light of Earth, Moon Mysteries Shine 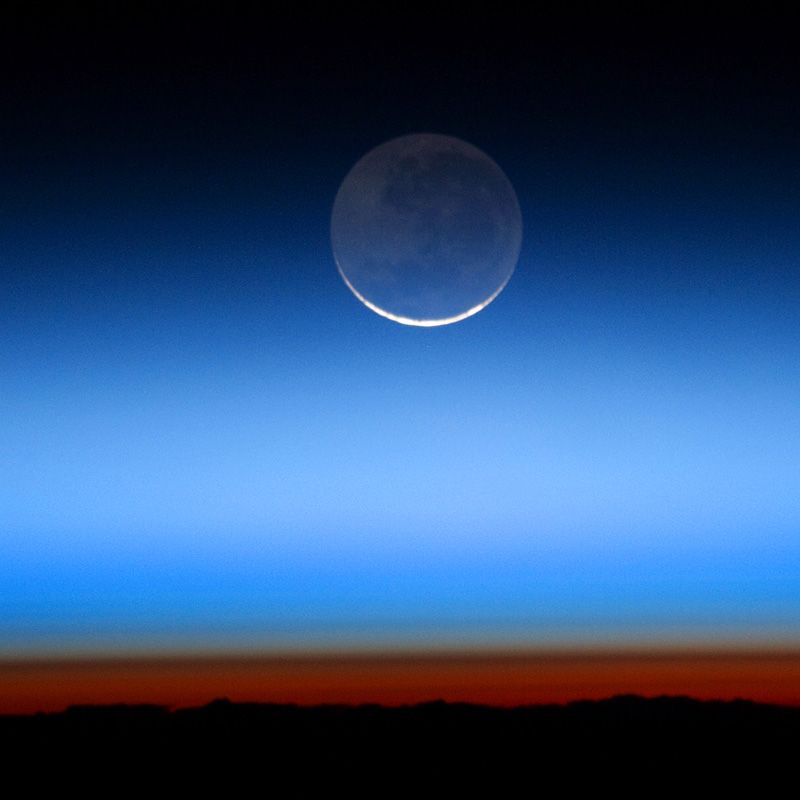 Each month, when the crescent Moon is setting in the evening just after its New Moon phase, you can observe the “old Moon in the New Moon’s arms,” also known as the “ashen glow.” This phenomenon results from sunlight reflecting off Earth’s surface and atmosphere onto the lunar surface. Interestingly, Leonard Da Vinci was the first person to offer the correct explanation of what we now call “earthshine.” You can also observe earthshine during the waning crescent phase just before New Moon phase begins, but you’ll have to be up before sunrise!

Besides being a beautiful sight, earthshine has already proven to be a useful scientific tool for studying the Earth itself. Earthshine is directly related to Earth’s reflective properties, or albedo. It peaks during spring in the Northern Hemisphere, between April and May, because during these months, Earth’s axis is tilted such that the Sun points toward higher latitudes that still have snow and ice on the ground. This snow and ice reflect more light than ground cover vegetation does in the summer.

Astronomers began measuring earthshine starting in the early twentieth century using photographic plates. In 1926, French astronomer André Danjon built a “cat’s eye” detector to study earthshine. The device produced two images of the Moon, which allowed him to compare the brightness of two different lunar regions. Danjon made over 200 such observations through 1930 and then J Dubois took over his efforts until 1954. Then, in the 1960s, Gustav Bakos found that earthshine contained evidence of seasonal changes in Earth’s albedo.

Since 1988, Big Bear Solar Observatory (BBSO) has been monitoring Earth’s albedo. Their work is embodied in “Project Earthshine,” and the data they have collected has contributed to studies of climate change. Project Earthshine is now carried out by a network of three telescopes including the BBSO, a telescope in the Canary Islands, and a third instrument in the Ukraine. The Danish Meteorological Institute and Lund Observatory are currently developing a globally distributed network of autonomous telescopes to expand the earthshine telescope network.

Why not just use satellites? Some satellites have been used to monitor earthshine and there are even plans to place a small satellite, a cubesat called CubeShine, in low Earth orbit to monitor earthshine. But satellites cost a lot more and their instruments degrade relatively quickly, so a network of ground-based ‘scopes has a distinct advantage for long term monitoring over decades-long time scales.

Images from Clementine instruments demonstrate that earthshine could be used as a source of natural illumination for scientific studies of the lunar surface during lunar night. The models of Glenar and colleagues indicate that earthshine provides illumination sufficient for ground-based imaging and spectroscopic observations. This, they argue, should prove useful in optical searches for the detection of water ice and other volatiles in PSRs. Such observations could be made from surface by robotic rovers or by a satellite in lunar orbit!

The topic of earthshine should fit well with a discussion of lunar phases in an astronomy course. Since it is visible during the 1-5-day period before a New Moon, you could hold an early evening observation session, maybe even holding an “earthshine photography” competition with students voting on the best image. If you want to incorporate earthshine into an upper level course, check out this “relatively simple” calculation of the magnitude of earthshine, which actually requires a numerical solution!

Image: Earthshine as seen from the International Space Station. [NASA]