The Great Comet Confusion of 1619 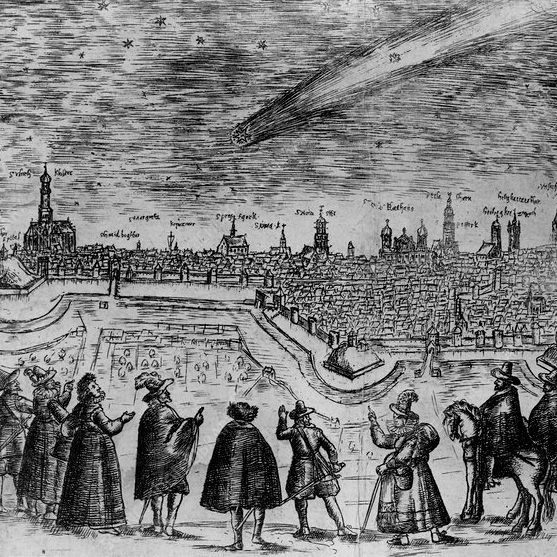 It was 400 years ago, in January 1619, that one of the greatest comets of all time finally faded from view. Much has been written about that comet, but its impact on English literature has until recently been obscured by disinformation perpetuated by generations of scholars.

These five lines from Book 2 of Paradise Lost (PL), written by John Milton and first published in 1667, have bedeviled scholars for more than three centuries:

Incensed with indignation Satan stood
Unterrified, and like a Comet burned,
That fires the length of Ophiuchus huge
In the Arctic Sky, and from his horrid hair
Shakes pestilence and war.

There are two astronomical aspects here: the constellation Ophiuchus, and the comet, with Satan thrown in for good measure. The key question that has caused scholarly consternation for 350 years is: Why did Milton say Ophiuchus was huge in the Arctic sky? In trying to explain this passage, a variety of totally unsupported explanations have been put forward by otherwise serious scholars. In 1893, David Masson described Ophiuchus as “a large constellation in the northern heavens, stretching forty degrees,” even though most of it is in the southern hemisphere! W.T. Lynn, in 1908, tied himself in knots by suggesting the “arctic sky” referred to the position of the writer, meaning “as seen under the Arctic sky.”

In 1913, Thomas Orchard faltered when he wrote Milton “appears to have been unfamiliar” with the position of Ophiuchus, even though Milton’s knowledge of astronomy was not only extensive, but up to date—he even met Galileo, and mentions that great astronomer in PL. But Orchard did make some progress, being the first to correctly identify the comet in PL as the great comet of 1618 (the great scholar Edward Gibbon, in 1788, wrote Milton was referring to the comet of 1664). Orchard even suggests “the apparition of this imposing object must have made a deep and lasting impression upon his mind.” Milton was a lad of 10 years old in 1618, so the sight of such a bright comet quite likely did make a big impression on him.

In 2003, Malabika Sarkar wrote an entire book linking a supernova mentioned in PL, along with the comet, to the appearance of Satan in Milton’s prose poem. She based her thesis in large part on a book written by the English astronomer John Bainbridge in 1618, who saw the comet. “Bainbridge locates the 1618 comet in Ophiuchus,” writes Sarkar. “Within the context of seventeenth-century millennialism, the appearance of Satan as the comet and the new star in Ophiuchus enhances our perception of him as powerful and compelling.”

To reach the truth, I looked at the Bainbridge book, which shows the comet running parallel to Ophiuchus. To confirm this, Dr. Donald Yeomans at the Jet Propulsion Laboratory ran an orbital calculation for me, proving the comet never appeared in Ophiuchus. The supernova did, but the comet didn’t. This conclusively disproved Sarkar’s contention, but it still did not answer the central question. The answer turned out to be remarkably simple. Milton never meant to say the constellation appeared huge in the Arctic sky. He was stating an astronomical fact, namely that the great comet appeared huge in the Arctic sky! If one inserts a comma after Ophiuchus in the third line, the meaning of the passage inverts, with the word “huge” becoming attached not to the constellation but to the comet. The great comet did indeed appear beside the constellation Ophiuchus, in Milton’s words “firing the length” of that constellation. The comet was not just bright, but exhibited a tail as long as 104º, which is why he described it as huge. As the comet dimmed it moved northward, eventually disappearing in the Arctic sky near the Pole star in January 1619. Thus, Milton gave a perfectly proper explanation for its appearance, one that remained obscured by layers of scholarly misunderstanding until I solved the “comet conundrum” in 2016.

This highlights the importance of scientific examination of claims made by literary scholars and art historians that impinge on science generally and astronomy in particular. I commend it as a fruitful area of study for young people embarking on a science career.

Readers can get the full details on my study in a journal published by the University of Toronto: Renaissance and Reformation, Winter issue of 2016.