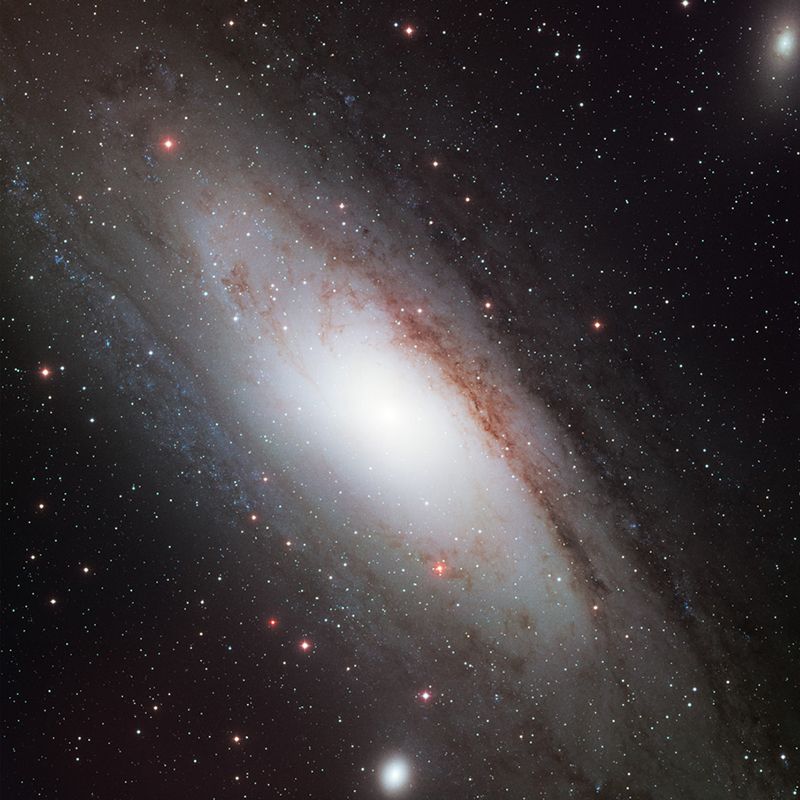 Image: Edwin Hubble found a variable star in the Andromeda Galaxy, and that star let him measure the galaxy's distance to us. [T. Rector and B. Wolpa (NOAO/AURA/NSF)]

As we celebrate the 30th year of the Hubble Space Telescope (HST), it is likely that we will all make good use of NASA’s Hubble Site. It is a great source of stunning images and inspiring videos. However, let us not miss this opportunity to expand our horizons and delve deeper. What else can we do with students to improve their appreciation for the process of science and maybe even the history of science?

Diving into the scientific legacy of HST’s namesake, Edwin Hubble, is a good starting point in any course. Hubble’s first big discovery actually came in 1923: a Cepheid variable in Messier 31, the Andromeda Galaxy. Because a Cepheid pulsates with a period directly related to its intrinsic luminosity, he realized the star was very far away. This Cepheid enabled Hubble to determine the distance to M31 and establish it as a galaxy in its own right, finally resolving the Curtis-Shapely controversy. It’s also important to acknowledge that, like Sir Isaac Newton, Hubble “stood on the shoulders of giants” and his discoveries built upon previous scientific work.

After he used that Cepheid star to discover the Milky Way Galaxy wasn’t the only galaxy, Hubble went looking for more such stars. He found those variable stars in 24 other galaxies. When he graphed the galaxies’ distances compared to their motion, another discovery jumped out at him: Galaxies are moving away from us. We should remind ourselves of those who laid the foundation for Hubble’s discovery of the expanding universe phenomenon. Such acknowledgements in the classroom are imperative as these more accurately represent the scientific process. Science history, with all its progress and pitfalls, is a great way to engage students!

If you haven’t read Hubble’s 1929 paper, you definitely should! Hubble never claimed to have discovered the “expansion of the universe” but rather what he called a “redshift distance relationship”: more distant galaxies have higher observed redshifts than those that are closer to us. Interestingly, while this velocity-distance relationship is presented today as v = Hod (where v is recession velocity, d is distance, and Ho is the expansion rate, now known as the Hubble constant), that’s not how he wrote it. However, Hubble did conclude that the relationship is definitely linear. It is also clear that Hubble was quite aware of the cosmological implications of his observations.

Why was Hubble cautious in drawing conclusions? At the time, there were several unresolved scientific issues. For one, if the redshift did, in fact, represent the expansion of the universe then the implied expansion rate yielded an age of the universe of about two billion years — much younger than the estimated age of the stars and the geological age of Earth. Then, there was the very nature of the redshift observed in galaxies: did the redshift actually represent a recession velocity or did it result from some other physical process? In 1929, seven months after Hubble’s paper, astronomer Fritz Zwicky published a paper examining the possible origins of these observed redshifts.

Zwicky argued that if the observed redshifts were a Doppler phenomenon, then galaxies receding from one another naturally imply an expansion of the universe. But he rejected this explanation, stating that the relationship would be linear only if a number of assumptions are made with regards to the distribution of galaxies. Instead, Zwicky favored a static universe in which photons lose momentum to intervening matter while traversing the vast distances in the cosmos: lost momentum leads to an increase in wavelength. (Incidentally, this “tired light” theory, has recently been revived as a purported resolution to dark-energy.)

Physics majors can read each of these papers and participate in meaningful classroom discussions. They are relatively easy reads and not particularly long (only about 6 pages each). Hubble’s paper presents observational results with a discussion of experimental uncertainties and the impact of changing your sample size. Zwicky’s paper explores theoretical explanations of the redshift phenomenon. It includes discussions of modern physics concepts including Compton scattering and relativity. Paired together, these would be appropriate for any third-year college course in modern physics or astrophysics.

If you have college seniors needing a capstone or thesis project, they can use actual Hubble data! In 2018, NASA placed over 100 TB of HST data on Amazon’s Web Services (AWS). Astronomer Ivelina Momcheva created a brief introduction to this exciting new database. This system requires a working knowledge of the Python programming language, and there will be some (small) fees charged by AWS for data usage.

For general education astronomy courses, nothing beats a well-guided lesson about Hubble plots. A more recent classroom activity, to appear in The Physics Teacher, presents data analysis targeted at introductory classes. (However, I envision using this in my experimental physics course for college juniors and seniors as a short data analysis project in which students collect their own data from the NASA Extragalactic Database [NED].)

Incidentally, don’t consider Hubble off limits to your first- and second-year physics students. Courses covering mechanics are also a good place to explore the physics of Hubble expansion and also invisible dark matter. You can even incorporate HST and its optics in your second semester physics: Why not devote a class to the mirror flaw after discussing mirrors?

The concept of universal expansion is difficult for students and teaching it is fraught with perils. But there are plenty of ways to teach these successfully. And, do be prepared to answer the hard questions: What exactly is this expansion and how are redshift, velocity, and expansion related?

Equipped with his five senses, man explores the universe around him and calls the adventure Science.” – Edwin P. Hubble