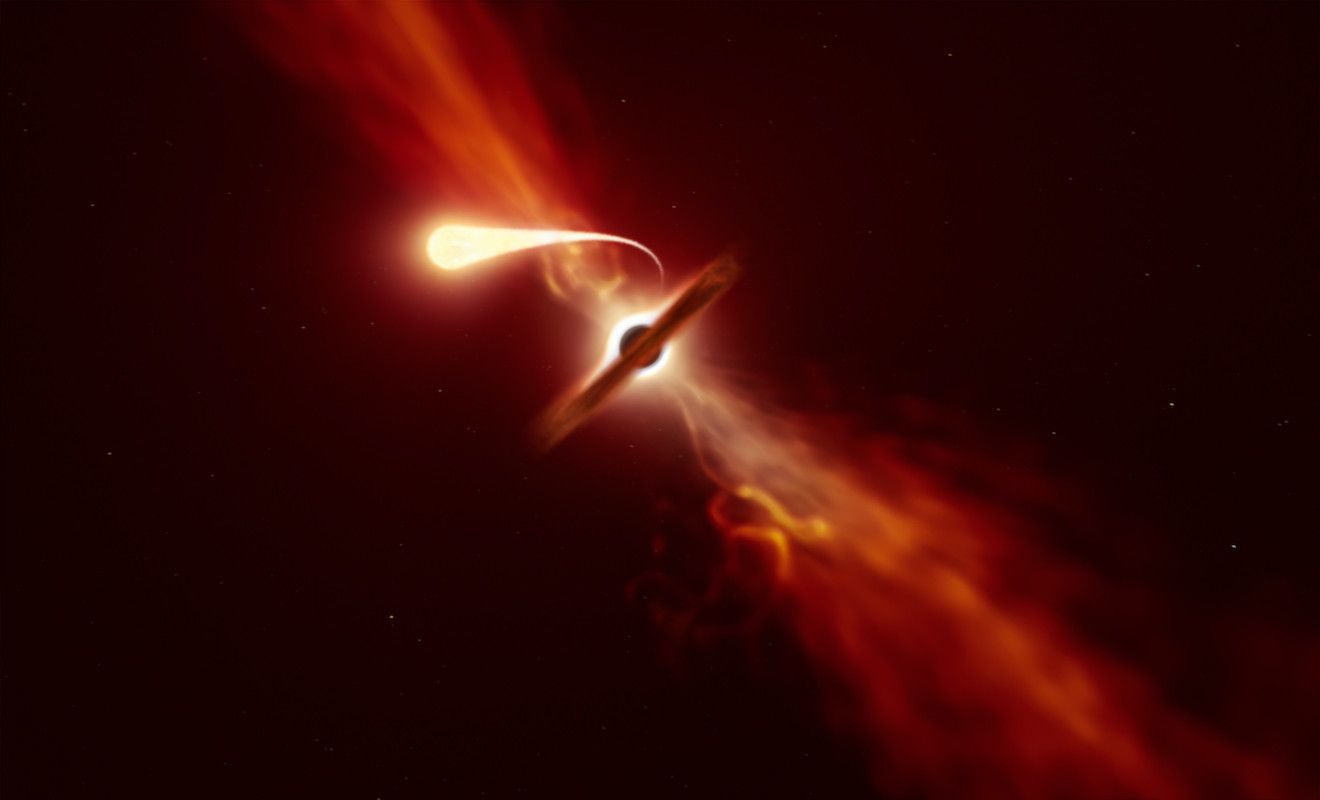 Image: This artist's illustration depicts a star being spaghettified by a black hole. [ESO/M. Kornmesser]

This article is part of a series of guest posts from a class taught by Mercury columnist C. Renee James. In this series, students profile some of the weirdest, most energetic, and most catastrophic sources in the cosmos.

Spaghetti is one of the tastiest dishes ever concocted on this great floating rock we call Earth. This union of hundreds of thin strands of milled wheat could only be called a stroke of culinary genius, resulting in one of the most versatile foods ever. Truly, spaghetti is so good that the universe itself needed to get in on it; a black hole's favorite food is spaghetti.

Recently, astronomers were able to observe in real time as a star wandered too close to a black hole and became an unwitting meal, undergoing “spaghettification” in the process.

Spaghettification is an official term used by astronomers, and it refers to the way stars stretch as a result of gravity when they get too close to black holes. The intense gravitational pull from the black hole both stretches and compresses the star and pulls it apart. This stretching and compressing is similar to the effect that the Moon has on ocean tides on Earth. This spaghettification is an extreme result of what’s called a “tidal disruption event.”

News about this particular event was made public October 12, 2020. The event, now named “AT2019qiz,” was the closest detected instance of such an event. At 215 million light years away, that made it the clearest view astronomers have ever had of such an event. Usually these tidal disruption events are too obscured by debris and dust floating around between us and them.

One of the most notable parts of the spaghettification process is the fact that stellar material is expelled from the black hole simultaneously while the star is sucked in, something that was only clearly observed this time. Have you ever slurped some spaghetti, and had the sauce fly out, propelled by the momentum of your slurping? Well black holes are messy eaters, and they do something very similar when eating some starghetti.

Scientists hope events like these will help us to understand the way black holes work along with their other processes, and act as a sort of benchmark for interpreting future black hole events. So the next time you're enjoying a certain stringy Italian meal, remember that you're in good company; somewhere out there there's a black hole doing the same thing.