Dark Matter Appears to be a Smooth Operator 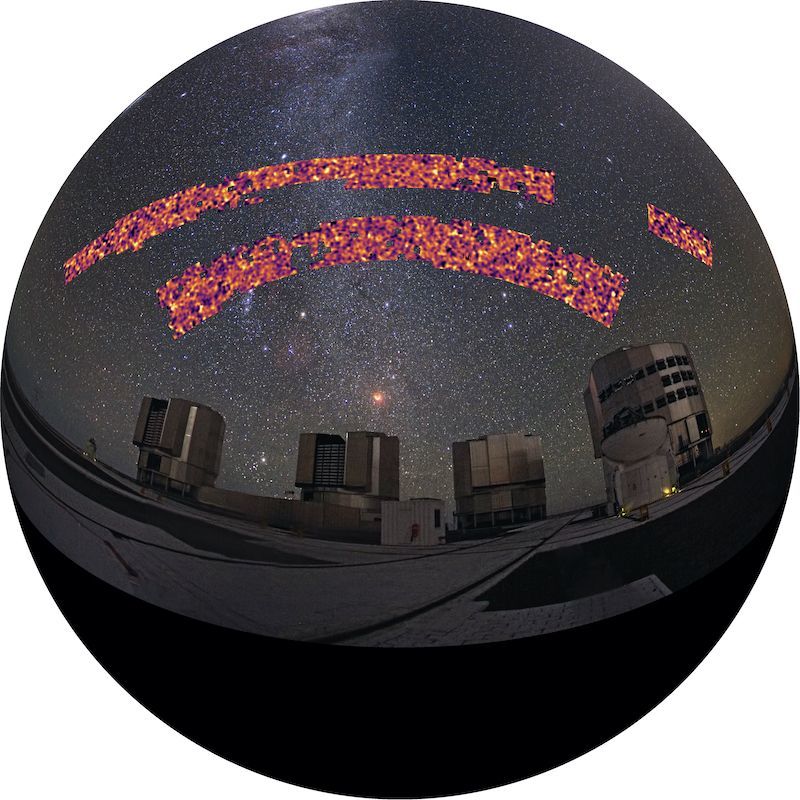 Image: The new KiDS results, shown as a map projected onto the sky above Cerro Paranal, reveal how mass is distributed in the Universe. The smallest features are about 30 million light years across. [B. Giblin, K. Kuijken, and the KiDS team. Foreground panorama credit: ESO/Y. Beletsky]

This article was originally published in the Summer 2020 (vol. 49, no. 3) issue of Mercury magazine, an ASP members-only quarterly publication.

Thirty-one million galaxies can’t be wrong, can they? An international team of astronomers has analyzed the light from and passing through these millions of galaxies and determined that their distribution, or lumpiness, is almost 10 percent more homogenous, or evenly spread, than the standard model of cosmology predicts.

That seemingly little discrepancy, as measured by the Kilo-Degree Survey (KiDS), has huge implications for our understanding of how matter is dispersed and the rate at which the Universe is expanding.

These galaxies, which we can detect directly, are serving as a proxy for dark matter, which we cannot—at least not yet. Most of the mass in the Universe is indeed dark matter; it’s the gravitational glue (with nature unknown) that holds galaxies together. Dark matter’s gravity ever so slightly distorts light passing through this matter, and analyzing the light provides a map of dark matter distribution. Regions of greater light distortion implies regions of higher dark matter density.

Theory holds that pockets of slightly higher dark matter concentrations after the Big Bang grew larger as gravity pulled matter into clumps, the earliest documentation of the rich getting richer. Ordinary matter moved toward these dark matter clumps, fused into stars, assembled into galaxies, and ultimately created the structure we see today of galaxy clusters separated by voids of relatively empty space.

Koen Kuijken, an astronomy professor at Leiden University in The Netherlands and KiDS project leader, does not care to speculate too much on the reason of the discrepancy between theory and the new observations. Instead, he and his team presented to the community this long-awaited measurement, posted online in July. Three of those articles are set to be published in the journal Astronomy & Astrophysics.

The measurement appears rather solid. The KiDS map was created using the VLT Survey Telescope on Cerro Paranal in northern Chile. The map covers about 1,000 square degrees, or 5 percent of the sky. The analysis used 31 million galaxies, some far enough away that their light took more than 10 billion years to reach the telescope. The map is a three-sigma result, meaning there’s only about a 1/1000 th chance that the survey just happened to capture an usually smooth region.

After putting the maps together and looking at the level of clustering among those millions of galaxies, the KiDS team found the variations is smoother by nearly 10 percent. And this smoothness could relate to how fast the Universe is expanding.

The findings add to the so-called “Hubble tension,” a disagreement between various well-constructed experiments on cosmic expansion. But ultimately, such discrepancies may reveal cracks in our theories that could open up new secrets about the Universe.