Dungal and the Eclipses of 810 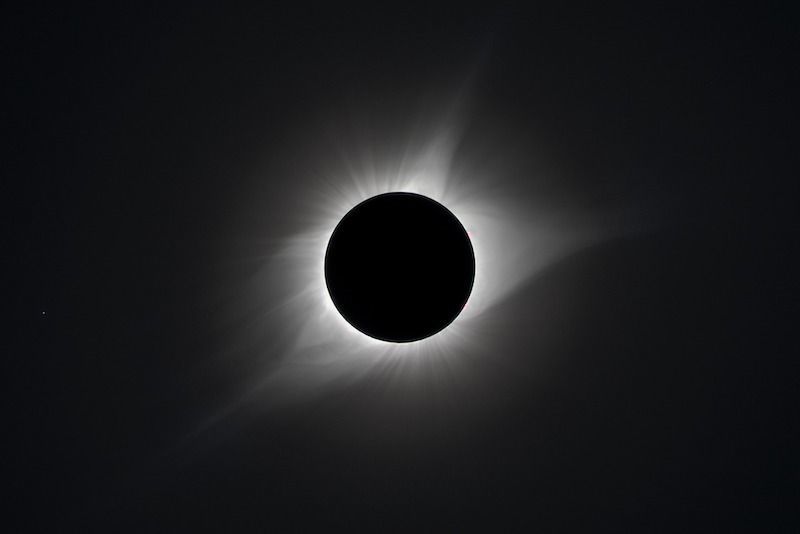 This article was originally published in the Winter 2021 (vol. 50, no. 1) issue of Mercury magazine, an ASP members-only quarterly publication.

Image: A total solar eclipse was visible over the Frankish Empire in 810. [Image by Boris Štromar from Pixabay]

History has recorded many solar eclipses, but only a few have reached iconic status as pivotal events — ones that altered how humans perceive the cosmos. The most recent of these was in 1919, when the deflection of starlight by gravity was confirmed, thus providing firm evidence for Einstein’s general theory of relativity. One such iconic eclipse occurred 1,211 years ago.

wo men — one famous and one obscure — made 810 a special year in astronomy, and it was sparked by a simple question: How could there be two solar eclipses in one year? The famous person who posed the question was Charlemagne (748–814), Emperor of the Romans. The obscure person, a monk named Dungal and located at St. Denis (20 kilometers north of Paris) in the Frankish kingdom ruled by Charlemagne, hailed from Ireland. It fell to his lot to answer the Emperor. In doing so he put his own stamp on the ordering of the Solar System.

The letter of 811, written the year after the question was posed, relies heavily on an earlier text, a commentary by Macrobius from the early 5th century about an ancient description of the universe related by Cicero (106–43 BCE). This shows the importance of things written many centuries before the time of Dungal and Charlemagne, as these early Medieval thinkers were heavily reliant on knowledge from ancient Greece and Rome. The first half of Dungal’s letter, in fact, is nothing but quotation from Macrobius, especially dealing with a description of the Moon and where the Sun is located in the Solar System.

Starting with Saturn and moving inward to Earth (at the center), Macrobius places the Sun sixth. According to historian Bruce Eastwood of the University of Kentucky, “The passage claims to resolve a controversy between Cicero’s placement and Plato’s placement in favour of the latter.” Cicero stated the Sun was fourth in order, as Saturn-Jupiter-Mars-Sun-Venus-Mercury-Moon, whereas Plato has the Sun immediately beyond the Moon. All of this has even more ancient origins: The ordering of Cicero came from the Chaldeans who ruled Babylon in the 8th century BCE, while the ordering adopted by Plato derived from ancient Egypt.

Macrobius gave the Platonic view his approval, but Dungal was having none of it. In his letter to Charlemagne, the monk did not transcribe the observational evidence Macrobius gives or provide his verdict on which system was correct. By this selective approach, Dungal claimed the Ciceronian order of the Solar System was the one that could explain the timing of solar eclipses. If no one but the Emperor read the letter, that would not have mattered much, but it was widely copied (three examples still exist) for educational purposes and found its way throughout Europe and the Byzantine Empire in the East. Dungal had no access to Ptolemy’s Almagest, as it was not translated into Latin until the 12th century, but Ptolemy’s planet ordering was the same; thus, it was due to Dungal in the 9th century that the classic Ptolemaic system gained even more ascendancy over the Platonic scheme.

Dungal not only followed Cicero in establishing the order of the Solar System, but he adopted his interpretation of the so-called Great Year, a 15,000-year period where all the planets and stars come back exactly to where they had been (see my column in Mercury, Autumn 2020). Thus, Dungal said astronomers could predict eclipses not just a few years hence via what he called the “intelligent investigation and industrious observation” which the ancients left as a model, but 15,000 years into the future!

A key claim of Macrobius did, however, find favor with Dungal: the existence of people “below” us. In an addendum to his letter, Dungal supports the view that humans lived in the southern temperate zone, an area no European had ever seen. This has a direct bearing on solar eclipses: A writer of 754 CE (erroneously) stated eclipses happen every 30 years, so 90 years after a famous eclipse of 664 CE meant he expected one that year. Because no such eclipse was visible, he suggested it may have been visible only in the Southern Hemisphere. At the same time Dungal was writing, other scholars were composing the “Compendium of 809–812,” which lists eclipses on 7 June and 1 December in 810 and one in 811.

The June 810 eclipse, which actually happened 5 June, was only visible from the Pacific Ocean, but knowledge of it (according to Dungal) had come to the attention of Charlemagne from an archbishop in Constantinople (then-capital of the Byzantine Empire). And the December eclipse actually happened November 30. As for 811, no eclipse was visible in Europe; however, observers in the Southern Hemisphere could have seen it. Historian James Palmer of the University of St. Andrews has written recently this is evidence astronomers of the time (in Constantinople, not the Frankish Empire) were calculating “ghost” eclipses: events that could not be seen by them but some of which were recorded in the Compendium.