Evidence of the Multiverse? 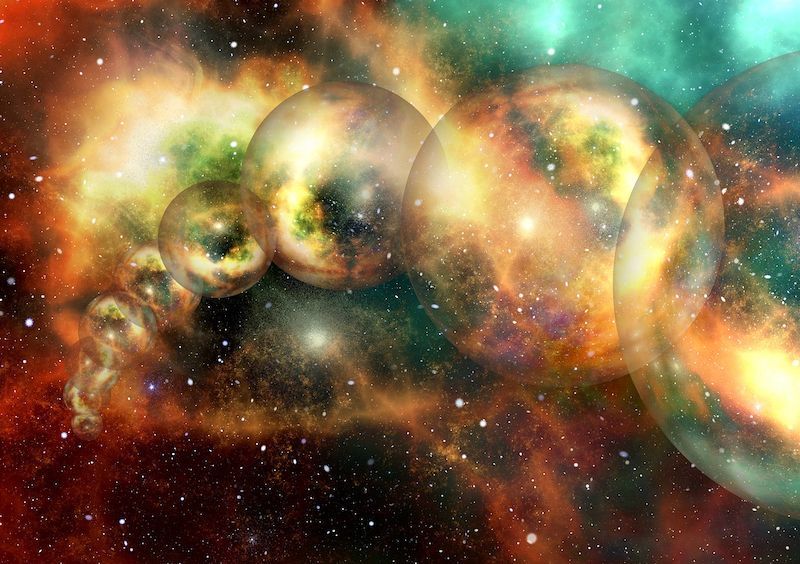 This article was originally published in the Autumn 2020 (vol. 49, no. 4) issue of Mercury magazine, an ASP members-only quarterly publication.

Image: Maybe the multiverse is to blame for our pandemic-filled year? [Image by Gerd Altmann from Pixabay]

It’s a common sci-fi device. Our protagonist winds up in an environment that seems familiar, but something is off. Long after the viewer realizes it, the character comes to understand that a power surge contaminated the timeline or some cosmic anomaly thrust our intrepid heroes into a mirror universe or…something. Scientific gobbledygook ensues. Then a solution presents itself, whether it’s 1.21 Gigawatts or resetting the Heisenberg Focusing Device or closing the gate to the Upside-down. And finally everyone is back where they should be, but perhaps a bit wiser.

The idea of parallel universes or a multiverse is an intriguing one, even to astronomers. Why should our universe with its laws and its history be the only one? Perhaps beyond our observational horizon exist other universes that are cut off from the one we can measure. Or perhaps at every instant in time, every possible outcome of every quantum mechanical roll-of-the-dice splits into its own universe. In this second picture of the multiverse, you — and everyone else who has ever lived — have made every possible decision and have lived every possible life. If you start looking into actuarial tables, this prospect will start to seem more terrifying than enchanting.

The problem with treating multiverse ideas scientifically is that there seems to be no place to start. Our observations are, as far as we can tell, restricted to this universe. Oh, sure, in the spring of 2020, there was quite a lot of excitement that NASA had somehow found evidence for a parallel universe in which particles move backward in time — at least that was the story if you believe the tabloids. Apparently one energetic particle had somehow escaped the bounds of its universe, its wreckage discovered by NASA’s balloon craft, the Antarctic Impulsive Transient Antenna.

Except… that’s not what the discovery’s announcement suggested at all. It was merely pointing out the curious case of a signal similar to the high-energy particles from a cosmic ray shower that appeared to be going up instead of down.

While there are several dozen more mundane explanations that should be ticked off the list long before invoking “proof of parallel universes,” the whole notion of co-mingling universes has actually been at the forefront of many instructors’ minds this year. I mean…face it. There really is no other explanation for 2020.

Imagine, if you will, that somewhere “out there” is a universe just like ours, alike in every way but one. In this parallel universe, Astro 101 classes are conducted in person. The problem is that the bizarre power surge (or whatever it was) mixed up some of the 2020 universes, and even though classes are meeting in person in this alternate universe, remotely learning students from our universe are showing up. And those students are presenting uniquely remote-learning problems.

Professor A explains. “At first it seemed normal. I walked into my classroom as always, took out my laptop, and began getting the presentation ready. A few students were already present, smiling at me as they always do. But then I realized that I couldn’t hear anyone talking. It was as though everyone was muted. Then, just as class time began, a bunch of students walked into the class holding cardboard cutouts of themselves. They propped these up at their desks and just… left. How are you supposed to engage with students who aren’t even there?”

Professor B laughs. “That’s nothing. I asked my students to turn in an assignment they’d been working on. Half of them pulled out their phones. Then my mailbox started chiming like crazy, and every single one was a question from a student asking me how to turn in the assignment. I told them just to put it on the front desk. They were still confused. I literally had to make a short video of myself putting a piece of paper on the front desk, and even after that, several of them turned in blank pieces of paper. Then they seemed really put out that I told them they’d get zeroes if there was nothing to grade.”

Professor C, who has been quietly listening to the conversation, approaches the pair. “I’m glad I’m not the only one thinking things are weird. I got to the active learning activity for the day, y’know, where the students pull their desks around in their group huddles. Some students turned their desks to face their groups, but then got up, left the room, and came back with a cardboard cutout of themselves to set up at their desks. In one group, there was only one person left, and she was fighting through the activity alone while staring at a bunch of cutouts.”

Professor B nods. “Yesterday, I had three students who kept going into the wrong huddles, so I spent a few minutes helping them find their groups. And that’s time I don’t have. I used to be able to walk around the room from one group to the next in no time, but now it feels like the groups are miles apart. By the time I get through all seventeen, class is practically over. Is there some weird local expansion of universe or something?”

Professor A looks furtively around. “What about…” she begins in hushed tones. “Exams? Have you noticed anything weird with the exams?”

Professor B exclaims, “Thank goodness I’m not the only one! I thought I’d seen everything. Last week, though, a student couldn’t even open the test paper. Another one was in the middle of taking it, and the exam just disappeared, as if there were a glitch in the Matrix.”

Professor C chimes in. “I’ve had students slowly sink into their seats so that only the tops of their heads are visible by the end of the test. And occasionally, a cat will come out of nowhere and hop onto someone’s desk. Someone’s mother even came into the classroom once, and the student yelled that he was in the middle of a test.”

“At least your students are taking the exam, or trying to,” Professor A says. “During my last test, I had 10 students walk into the room, prop up their cardboard cutouts and leave. They didn’t even notice there was an exam going on.”

All three professors stand in awkward silence for a few minutes. Then Professor B says tentatively, “I know this is going to sound ridiculous, but this doesn’t even feel like our own universe anymore.”

So what do we do?” asks Professor C.

“I don’t know, but it’s not as though we can just keep plowing ahead as if nothing’s changed,” Professor A says. “I mean, if there’s anything that science fiction has taught us about falling into a parallel universe, the first thing we need to do is play along and accept the new reality. We don’t want the students to suspect anything.”

“Exactly,” agrees Professor B. “And we need to figure out exactly what the differences are and work with them. The ones we’ve talked about are obvious, but some are more subtle. But they’re definitely there, and we need to figure them out if we’re going to teach effectively in this new world.”

“I think Professor D is in denial,” Professor C says. “He seems to realize things are different, but he keeps fighting to do things the way we always have, and he’s mumbling to himself quite a lot these days. This new reality is going to destroy him.”

“I’ve noticed that, too,” Professor A says. “He complains about students not knowing how to turn in an assignment on the front desk, but then he refuses to make a video to show them how. I know it seems like a weird thing to have to do, but once you do it, you won’t ever have to again. I’m just not sure what to do about the students who just drop off their cardboard cutouts at the beginning of class and then leave.”

Professor B ponders the situation. “I think we need to make a few modifications at a time, and accept some parts of this reality until we learn more about it. It’s so aggravating, though. It feels like starting all over again, just like when we were fresh-faced instructors prepping multiple classes for the first time. But back then we knew our efforts would pay off in the long run, and the next semester would be better than the last.”

Professor A brightens. “Perhaps the same will happen here if we focus more on what we need to adapt to rather than why we can’t simply keep doing what we used to. Who knows? Maybe one day we’ll get back to our own world and everything will go back to the way it once was.”

“But what if we don’t? What if we’re stuck here forever?” Professor C asks with a hint of panic.

“All the more reason to learn as much as we can and adapt to the circumstances,” Professor A assures. “No matter what, we owe that much to the students we’ve got.”

Professor B and Professor C nod in agreement.

At that moment, a lightning bolt flashes outside; the rhythmic, mechanical wheezing of a TARDIS echoes through the corridor, and a groundhog scampers by, followed closely by a breathless Bill Murray.

“Did you see which way he went?” Bill Murray asks. “I’ve got to find him before my ice sculpting lesson starts!”

The three professors simply shrug. 2020 has just been that kind of year.

C. Renee James is a science writer and professor of physics at Sam Houston State University, where she has taught introductory astronomy since 1999. She is the author of two books, “Seven Wonders of the Universe That You Probably Took for Granted” (2010) and “Science Unshackled” (2014), plus dozens of popular astronomy articles. Read more articles by Renee.

Scott T. Miller is a professor of physics and astronomy at Sam Houston State University, where he has taught introductory astronomy for non-science majors and engaged in astronomy education research for 12 years. Read more articles by Scott.